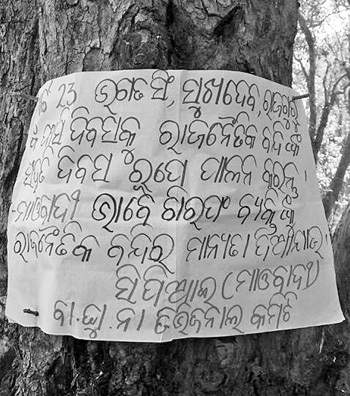 A couple of Maoist posters appealing to the villagers not to become police informers was found at Lakhbahali near Pahadpadar village under Lanjigarh block of Kalahandi district on Thursday. The Maoists have also appealed to the locals to observe ʹSahid Divasʹ on Thursday.

In one of the posters issued by CPI(Maoist) Bansadhara, Ghumsar, Nagavalli divisional committee, they have demanded political prisoner status to the arrested red rebels.In the posters, the Maoists asked the villagers not to be lured by money and warned police informers of facing punishment like the one given to Banamali Naik of Karlapat. People, who are working as police informers, should desist from doing so, the posters stated.