﻿﻿﻿﻿﻿ The Punjab remembers the immortal contribution of Shaheed Bhagat Singh
﻿

The Punjab remembers the immortal contribution of Shaheed Bhagat Singh 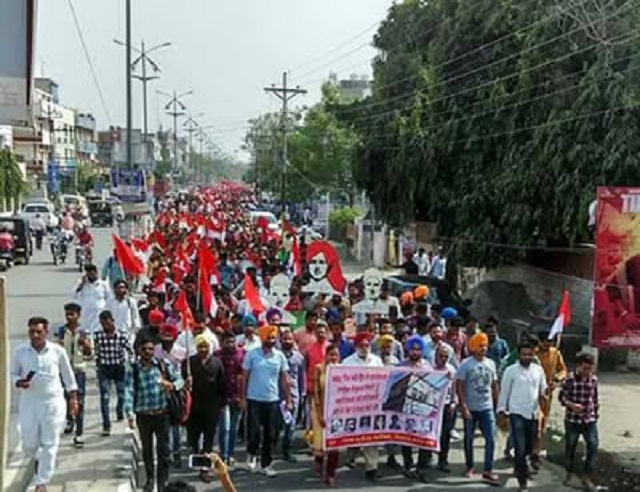 SALUTE THE CONFERENCE AND RALLY OF PUNJAB STUDENTS UNION AND NAUJWAN BHARAT SABHA IN FEROZEPUR WHICH CARRIED ON THE LEGACY OF THE IMMORTALS MARTYRS BHAGAT SINGH,SUKHDEV AND RAJGURU.

THE PARTICIPANTS ,INCLUDING MANY WOMEN THRONGED TO THE ERA REMINISCENT OF THOUSANDS OF SMALL STREAMS CONVERGING INTO AN OCEAN.

THE VENUE APPEARED AS THOUGH ILLUMINATED WITH THE INEXTINGUISHABLE FLAME OF SHAHEED BHAGAT SINGH.

SPEAKERS CONDEMNED THE PRESENT DAY RULERS WHIO BETRAYED THE PATH OF THE GREAT MARTYRS IN SPITE OF USING THEIR NAME AND HIGHLIGHTED THE POLITICAL PATH AND DEVELOPMENT POLICIES OF THE PRESENT RULERS WHICH RAN AT EXACTLY OPPOSITE POLES TO WHAT BHAGAT SINGH PROPAGATED.THE HEARTS OF THE PARTICIPANTS LOOKED FILLED WITH RAGE AGAINST THE FASCIST ECONOMIC POLICIES OF THE POLITICAL; PARTIES WHO DIVERTED THE BURNING ISSUES OF THE MASSES.

I WAS PRESENT AND REALLY IMPRESSED WITH SUCH A POSITIVE EFFORT OF THE STUDENT COMRADES ,PARTICULARLY THE GIRLS.THIS VERY DETERMINATION AND SPIRIT NEEDS TO BE REVIVED ALL OVER THE COUNTRY WHEN COMMUNAL FASCISM HAS BECOME A THORN IN THE FLESH FOR ALL DEMOCRATIC VOICES.

Around 5000 people participated in conference and rally to commemorate Bhagat Singh and his fellow comrades Sukhdev and Rajguru.

Speakers vociferously condemned the actions of the state on imprisoning professor Saibaba and 5 others with life sentence as well as awarding the same to the Maruti workers.

The main theme was based on the building of the memorial for the great martyr to which the state had been absolutely apathetic. Over 5000 students and youth participated including around 800 girls.1000 came from Sangrur,100 from Muktsar,1000 from Faridkot,around 150 from Bathinda ,Patiala and Amritsar..I was particularly impressed with the participation of girl students,which was significant.

After the public meeting a rally was held for about one hour to the market are of the town..I was privilaged to be present and witness the ressureection not only of the spirit of Shaheed Bhgat Singh but also echoes of the great student and youth movement led by the same organizations in the 1970s.Such an assembly has great significance to the revolutionary democratic movement as a whole.

When communal hindu fascism is posing a threat similar to what the Nazi regime created in Germany it is vital that Bhagat Singhʹs ideology or message reaches every walk of life.

Unlike the Gandhian Congress Bhagat Singh stood for revolutionary anti-feudal and anti-imperialist resistance. Gandhian approach would be class collaborationist towards Hindu Saffron Fascism of the RSS variety.

Ferozepur, An important programme of democratic students Organization was held simulntaneously in Hussainwala ,the birthplace of the great martyr.March 23

Thousands of Punjab Studentsʹ Union (PSU) activists took out a march here today to urge the state government to convert the double-storeyed building in Turi Bazaar locality, which was a hideout of Shaheed Bhagat Singhʹs Krantikari Party, into a museum-cum-library.

Rajinder Singh, president, PSU, said, ʹWe have already organised more than 200 meetings across the state to make people aware of this buildingʹs importance.ʹ

Kranti Kumar Katiyar, whose father Dr Gaya Prasad used to run a pharmacy at this place, said the government had granted this building the status of a protected monument after a long struggle, but nothing had been done to develop it.

Earlier, HC Arora, a Chandigarh-based advocate, had filed a plea in the High Court, seeking heritage status for this building. Subsequently, the Department of Cultural Affairs, Heritage and Museums had issued a notification in December 2014 under the Punjab Ancient and Historical Monuments and Archaeological Sites and Remains Act, 1964.

However, no funds were allocated for the restoration and preservation of the building, following which Arora moved the court again.

Rakesh Kumar, who has authored books on the monument, said, ʹConverting the building into a museum-cum-library will be our true salute to the martyrs.ʹ