﻿﻿﻿﻿﻿ A Complaint lodged to NHRC for deteriorating health of Dr. G.N. Saibaba by Defend in India
﻿

A Complaint lodged to NHRC for deteriorating health of Dr. G.N. Saibaba by Defend in India 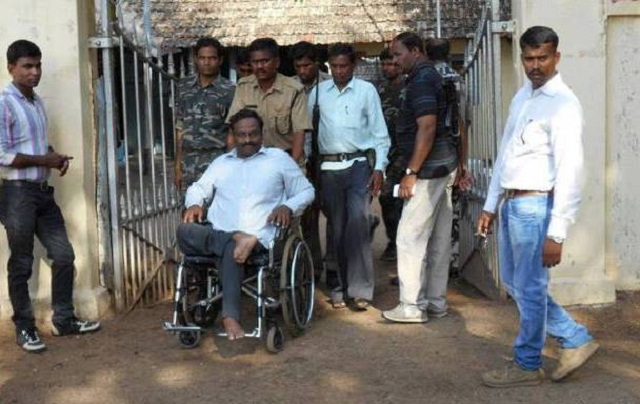 Most humbly this is to bring to your notice that I came to know from the wife of Professor Saibaba that on 22nd February 2017, Prof. G. N. Saibaba was admitted in ICU of a hospital for a mild chest pain and breathlessness and a severe pain in abdomen. And on 28th February, he was discharged from the hospital with the doctorʹs advice for ten days bed rest and not to travel and that within four weeks he should go for a surgery for removing of gallbladder. She also informed me that they have submitted the medical report to the Gadchiroli Session Court but the concerned Judge did not consider the report and insisted Prof. Saibaba to remain present on the Judgment date on 7th March 2017 in a case in which he was an accused. She informed me that to upheld the dignity of the court, he remained present during the judgment date, when he was convicted to life under a draconian law and soon after that he, along with Hem Misra and Prasanth Rahi and three others, was taken under the police custody. We are surprised to see the heartlessness of the Concerned Session Judge, who had turned down the prayer of the Advocate of Prof. Saibaba to issue an order directing the jail authority to give required medical care, help of assistant for movement as he is a wheel chaired bound person and operation to be performed for gallbladder. She also informed me about the pathetic experience of her brother-in-law, who went for a visit to Saibaba on 17/03/2017 at Nagpur Central Jail and who informed that Dr. Saibaba was not given proper diet and he is vomiting when he is trying to have food, supplied by jail authority and completely deprived of any medical care because of which Dr. Saibaba became very weak. Saibabaʹs brother has also informed that he got unbearable pancreatic pain in jail twice. The jail authority did not accept the medicine, fruits, and bed sheet offered by the brother of Prof Saibaba. When Saibabaʹs brother, G. Ramdev, tried to talk with the Jailer regarding the deteriorating health issue of Saibaba, the Jailor has refused to talk with him.

We are of the opinion that this is a case of deliberate violation of Right to Life and due medical care of a prison inmate and we treat this act of jail authority as a reprisal on Prof. Saibaba because of his legitimate human rights work. The same is carried out under the strict unofficial direction from the concerned state authorities, whose development policies have been challenged by him and because of that challenge, the state actors were not able to implement those development policies, which was having a huge negative impact on environment and livelihood of the people of the place where those policies were proposed to be implemented.

So, immediate intervention of your commission is necessary to save the life of Dr. Saibaba as the prison authority may remain inactive deliberately as they know that custodial death due to non facilitation of medical care is redressed in India with Rupees one lac and without incurring any liability by the erring state actors.

So, therefore, we pray before your commission to pass the following orders.

Directing the Officer in Charge of the Focal Point for Human Rights Defenders of your commission to give a surprise visit to the Nagpur Central Jail with a Medical team to meet Prof. Saibaba and thereby to make arrangements for due medical care and services to save the life of Professor Saibaba;
Directing your commission investigating team to investigate the matter and submit a report within 15 days on the matter complained of and thereby to take appropriate legal action/s against the erring jail officials guilty of depriving Prof. Saibaba due medical services;
Directing the concerned authority to provide such kind of food which Prof. Saibaba can consume without any problem;
Directing the concerned authority of the state of Maharashtra to pay suitable amount of compensation for depriving due medical care and services to Prof. Saibaba;
Directing the concerned authorities of Government of Maharashtra as well as the Central government to take such other action/s to redress this instant complaint as well as to prevent the incident complained of.
I shall be grateful for registration and action on this complaint today by taking into consideration the urgency of the matter and thereby save the life of Prof. Saibaba.