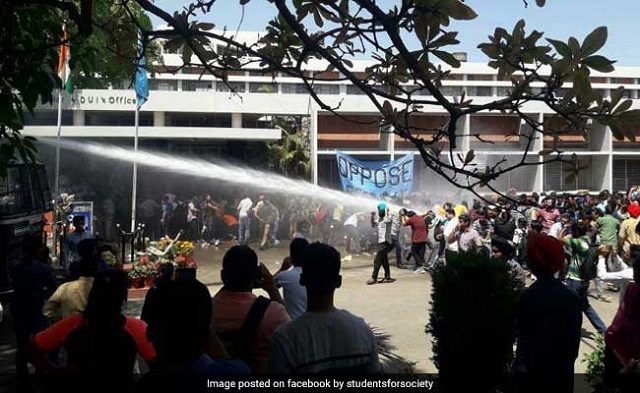 Tension prevailed on the Punjab University campus as students protest the senate approval of the ʹenhancement in fee structure of various courses being taught at University Campus and at its Regional Centresʹ. IANS reported that the protesting students clashed with the police. Police sources told IANS that a few students were injured in the clash after a baton charge and use of water cannons.

The police used tear-gas to disperse the agitatators who had gathered near the Vice Chancellorʹs office complex.

Meanwhile, the Students for Society (SFS) and other protesting student organisations from the campus accused the police of ʹbrutal attackʹ on the student protesters. SFS said in a Facebook post that several students injured severely in the clash with police.

According to news agency IANS, protesting students pelted stones at the police and broke window panes of the offices and damaged other university property.

Later, a few students, who were being chased by the police, entered a gurdwara on the campus and took refugee there. Police officials were reported to be negotiating with them to come out.