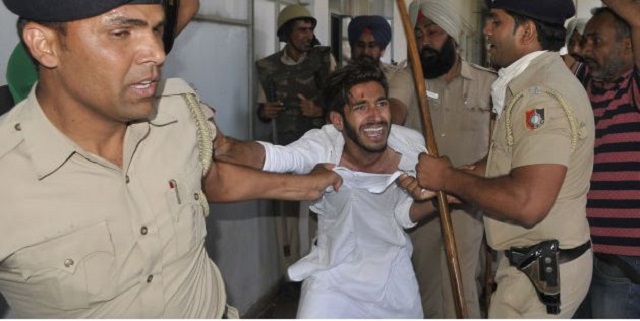 At least 66 students of Panjab University have been booked on sedition charges for protesting against the fee hike in the campus. Following an outcry over the move, a senior officer of Chandigarh Police said that the charges would be dropped if no ʹsubstantial evidenceʹ is found.
According to a report in the Indian Express, the complainant Ashwani Kaul, PUʹs chief security officer, said, ʹOn behalf of PU, I lodged a police complaint and stated that the protesters raised slogans against the state. By the word ʹstateʹ, I meant Ministry of Human Resources Development, UGC and PU. The protesters were raising slogans such as ʹPU murdabad, ʹMHRD murdabadʹ and ʹUGC murdabadʹ. Police misinterpreted and slapped sedition charges on them. I have examined CCTV footage and video recordings of the protest and have clarified the situation to Chandigarh Police.ʹ
Chandigarh Police SSP Eish Singhal said, ʹPolice had slapped sedition charges on the students, but the charge shall be dropped if no substantial evidence is found during investigation against those bookedʹ.
At least 40 people, including 22 policemen, were in the protest. At least 52 students had been arrested till late Tuesday evening and will be produced before a court on Wednesday.
Students were also booked under other sections of the Indian Penal Code (IPC), including 147 (rioting), 148 (rioting, armed with deadly weapon), 149 (unlawful assembly), 332 (causing hurt to deter public servant from performing his duty), 353 (assault or criminal force to deter public servant from performing his duty) and 308 (attempt to commit culpable homicide), the Indian Express reported.
The PU Senate had approved the hike in March for new admissions from the 2017-18 academic session. The annual fees for BA and BCom courses, for instance, have been hiked to Rs 10,000 from Rs 2,200. The fee for MPharma is the highest at Rs 1.5 lakh.
Congress spokesperson Randeep Singh Surjewala, a former student and ex-senator of PU, described the police action as ʹthe most brutal attack on students ever in the history of PUʹ. He tweeted, ʹBarbaric and savage attack by Chandigarh Police on hapless students and media in Panjab University is shameless. Is this the way BJP treats the young and students?ʹ