50 Years of Naxalbari in Canada 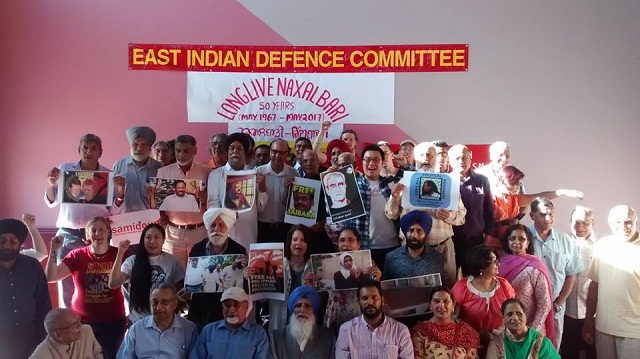 A Tribute to the Women Martyrs!

The villages, towns, soils, furrows of fields, woods and mountains, rivulets and rivers of vast India turned red with the warm blood of these thousands of immortal martyrs which included hundreds of women comrades. In the thorny and tortuous trajectory every success, the unity of the party could be achieved only through their innumerable sacrifices. It is the base on which the party stands today and endeavors to advance the Peopleʹs War.

The New Democratic Revolution in India is led by the working class and peasantry, its main ally. Most of the martyrs belong to the peasantry. Hundreds of women comrades have laid down their invaluable lives. The protracted peopleʹs war does not advance along a smooth and straight path; its nature of momentum is zigzag. This reality is reflected in womenʹs life histories. These woman comrades represent the many ups and downs and successes and failures experienced by the revolutionary movement.

Most of the women martyred have died while fighting state and paramilitary forces of repression. While some died in battles, some of the women guerillas were caught with injuries, many of whom were gangraped, tortured and killed in cold blood. Many had been jailed and some died due to torture and abysmal jail conditions. It was not just the women guerillas, but unarmed women activists of both above-ground and underground mass organizations have been killed in cold blood either by the police, paramilitary or by vigilante gangs sponsored by the reactionary governments. Urban women activists who organized the working class, urban poor, and various sections were caught, cruelly tortured and killed.

These women martyrs were inspired by Maoism and the revolutionary movement. The reasons for their joining the movement may vary but in common is their aspiration to be liberated, and to liberate, all women from patriarchy. The life histories of these women show how they fought patriarchy in society, in their comrades in arms, and in themselves. With their glorious lives, they have demolished every kind of feudal and bourgeois stereotype about women.

The Indian revolution is a part of the World Socialist Revolution and the CPI (Maoist) considers itself an inseparable part. The Peopleʹs Liberation Guerilla Army is a detachment of the army of the international proletariat. The new democratic peopleʹs power or base areas are the base of the world proletariat and oppressed people. All over the world, in the revolutionary movements of Peru, Turkey, Philippines and Nepal, women are sacrificing their lives in anti-imperialist struggles. On this occasion, we remember and pay tribute to those martyrs who gave their lives in building a better society for all.