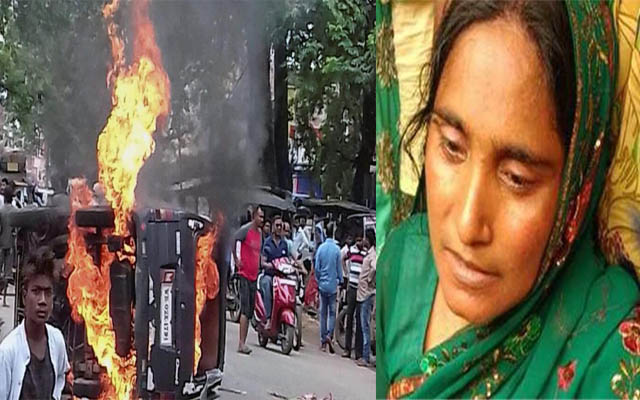 The wife of the man who was lynched in Jharkhandʹs Ramgarh district on suspicion of carrying beef has alleged that the mob that beat her husband to death mostly included Bajrang Dal activists. ʹThey were rogues owing allegiance to the Bajrang Dal,ʹ Mariam Khatoon told Hindustan Times on Friday.

Other reports also claimed that members of the Bajrang Dal Gau Raksha Samiti had stopped his vehicle and lynched him.

A group of people on Thursday had lynched Asgar Ansari near Bajartan village and set his van on fire. He was taken to a hospital by the police, where he died during treatment. The police have imposed prohibitory orders under Section 144 in Ramgarh district.

ʹNot a beef traderʹ
Mariam Khatoon has denied claims that her husband traded in beef. ʹHe was into coal trading,ʹ she told Hindustan Times.

The manʹs sister-in-law Abida Khatoon also blamed the police for patronising and protecting Bajrang Dal members. ʹThey are targeting and killing Muslims, while the police are deliberately looking the other way.ʹ

Ansari, who is survived by his wife and six children, was the only breadwinner.

Gupta further claimed that the Ramgarh units of these two outfits were dissolved in 2016.