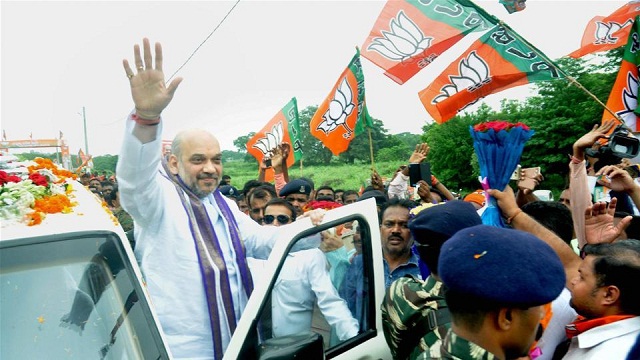 At a time when the incidents of lynchings in the name of ʹgau rakshaʹ are being reported from across the country, a vehicle in BJP president Amit Shahʹs motorcade hit a cow during his Odisha tour on Thursday, leaving the animal wounded and prompting a sarcastic comment from senior BJD leader Tathagat Satpathy. ʹAmit Shahʹs carcade hits a cow at Barchana. Animal badly hurt. Holy Cow!ʹ BJD MP Satpathy tweeted, taking a dig at the BJP chief. A police officer said the mishap occurred near Bandalo on National
A police officer said the accident occurred near Bandalo on National highway No-5 in Barachana police station limits in Jajpur district on Wednesday. ʹOne of the vehicles of the convoy of Amit Shah hit a cow which was crossing the road near Banadlo. While the animal was injured, the vehicle bearing a VIP sticker was also damaged,ʹ Niranjan Sabar, Inspector in-charge of Bayree police station, said. Amit Shahʹs vehicle had already passed the place by that time, the officer said.
Senior BJP leader and former legislator, Pratap Sarangi, who was in the convoy, stopped along with some party workers to see the condition of the injured cow and arranged for its treatment, party sources said.
Sarangi immediately spoke to the Jajpur district collector and asked him to take steps for treatment of the injured animal. Jajpur Collector Ranjan Kumar Das swung into action and directed the district police to take quick measures for its treatment, officials said.
Officials from Barachana and Bayree police stations reached the spot and treated the injured cow with the assistance of veterinary doctors. The animal is doing fine now, police said.
Mohan Bhagwat Backs Cow Vigilantes, Says Gau Raksha Is Integral Part Of Constitution
BJP leaders, who have time and again projected themselves as ʹgau-rakshaksʹ (cow-saviours), might have a tough time in dealing with Oppositionʹs bantering and online trolls over the latest incident.