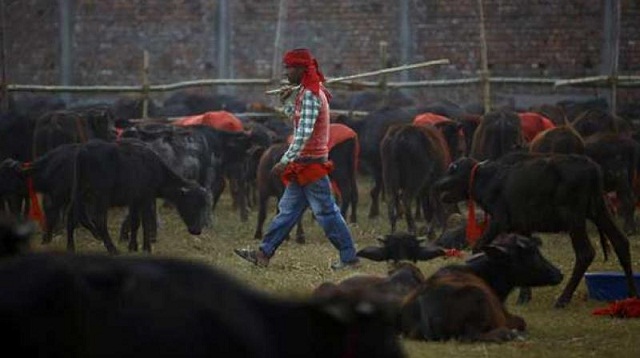 Six people were beaten Saturday by a mob in Haridas Nagar area of New Delhi for allegedly carrying buffalo calves. The mob also reportedly vandalised the vehicles in which the calves were being carried. Delhi Police has registered an FIR and is currently investigating the scene.

Locals gathered at the spot and tried to rough up the truckers accusing them of carrying buffaloes illegally. However, policemen reached the spot on time and brought the situation under control. A case has been registered against unidentified men, police said. No arrest has been made yet in this connection.

The attack comes just a week after Prime Minister Narendra Modi, in a speech, warned cow vigilantes from resorting to violence. Speaking at Sabarmati Ashram in Ahmedabad, he said that killing for cow protection is not acceptable. ʹKilling people in the name of cow is unacceptable. No one has the right to take law into his/her hands. We belong to a land of non-violence. Violence is not the solution to any problem,ʹ the Prime Minister had said. Modi said that Mahatama Gandhi would not have approved the violence in the name of cow protection.

PM Modiʹs response had come after a spate of lynchings in the country, some at the hands of cow vigilante groups. In a recent incident, a 15-year old boy Junaid Khan was stabbed to death after an argument broke out between him and a group of people over seats on a Mathura-bound train in Ballabhgarh in Haryana. Junaid, who was with his two brothers at the time of the incident, was mocked by the mob over his skull cap and was called a ʹbeef-eaterʹ. At least five people have been arrested in the case.