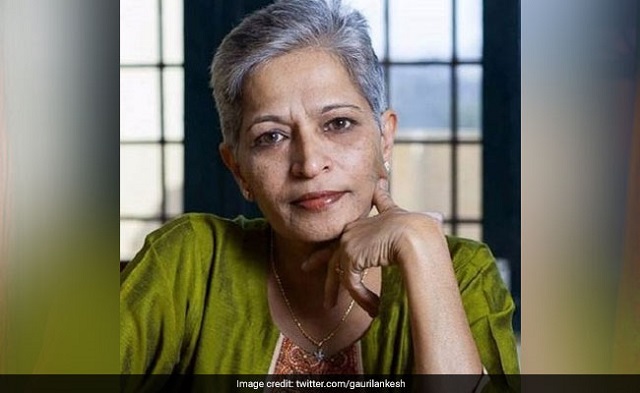 According to reports, at around 8pm, unidentified men shot at Gauri and wounded her fatally before escaping from the scene. Initial reports say more than five shots were fired.

Police said that Gauri was getting out of her car to open the gate of her house, when assailants shot her. The shots penetrated her chest and she was killed on the spot, reports said.

"We got the information just now. She was returning home. Her home is in Ideal Home Layout in Rajarajeshwari Nagar. She got down from her car and she was opening the gate when she was shot. The details are sketchy, and we are yet to know who has done it," DGP RK Dutta said. Police have cordoned off the area around Gauriʹs house.

A friend of Gauriʹs told Suvarna News that she had been working until around 7.30pm and was returning home.

Gauri was the daughter of writer, translator and journalist P Lankesh. She was a veteran editor of Lankesh Patrike and columnist in both Kannada and English, and was a vocal critic of the right wing.

The manner in which Gauri was killed was eerily similar to the way in which rationalist MM Kalburgi was killed two years ago.

The former Vice Chancellor of Kannada University,Hampi, known for his outspoken criticism of the right wing, had also been shot at his residence.

Last year, she was convicted of criminal defamation in two cases by the Judicial Magistrate First Class (JMFC) Court in Hubballi on Monday.

Dharwad BJP MP Prahallad Joshi and BJP leader Umesh Dhushi had filed individual defamation cases against Lankesh in objection to a report on BJP leaders she had published in her periodical on January 23, 2008.

In an interview to Narada News in December 2016, she had said, ʹAs a citizen of India, I oppose the BJPʹs fascist and communal politics. I oppose its misinterpretation of ʹHindu Dharmaʹ ideals. I oppose the caste system of the ʹHindu Dharmaʹ, which is unfair, unjust and gender-biased.ʹ

ʹMy Constitution teaches me to be a secular citizen, not communal. It is my right to fight against these communal elements,ʹ she said.