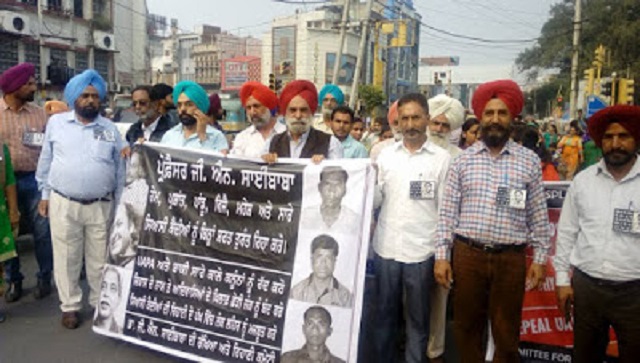 On November 1st around 450 people staged a march from company bagh to Ghadr memorial hall raising slogans demanding the release of professor Saibaba.

The protest was qualitatively a success playing a very important role in the building of revolutionary democratic political consciousness against the fascist political trends prevailing today in India.Such protsets shoulkd develop from a spark into a priarie fire.Professor Saibabaʹs voice is that of the opressed millions of the entire nation and thus the movement for his release is morally the protest against fascist repression on peopleʹs movements and on political prisoners as a whole.It is of great regret that inspite of the professor on the brink of virtually dying the state has been so cuel displaying sheer apathy.

It reflects on how professor Saibaba was a thorn in the flesh to the ruling classes and their pro-coprporate policy stooges.In the history of post-independence arguably no intellectual has so courageously and forthrightly defended revolutionary democracy or maoist movement.His life sentence is a perfect reflection of the nature of fascism within third world countries even if formally bourgeois democracies.It is progressive that so many trends are uniting to combat this barbaric act which is worse than sentences to political prisoners in even the colonial British era considering the era when concept of human rights has developed and the fact that the victim is polio affected.

It has also reflected how the state has sharpened itʹs fascist fangs like never before bowing to the dictates of pro corporate international policies.In areas of Jharkhand,Chattisgarh and Chandrapur virtual fascism is perpetrating the judicial system.Never have their been such infringements in the bourgeois democratic constitution of India.Professor Saibaba is a hero in the eyes of the opressed Adivasis and all other struggling sections .