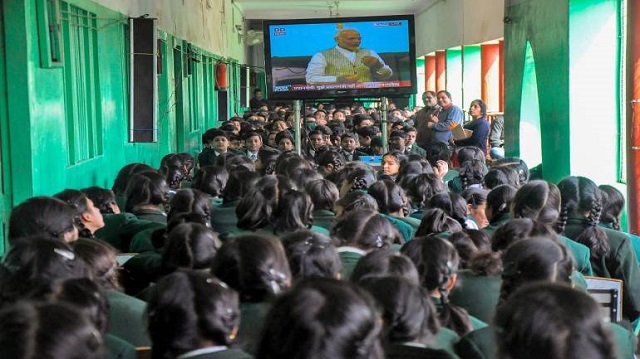 Dalit students at a school in Himachal Pradesh were reportedly made to sit outside, separately, in a "place used for horses" during the telecast of Prime Minister Narendra Modi ʹPariksha Par Charchaʹ last Friday.

An Indian Express report stated that some of the students complained to Kullu Deputy Commissioner Yunus on Friday evening, alleging that a teacher, Mehar Chand, told them to sit outside the room where the television had been set up.

The school in Kulluʹs Chestha gram panchayat had made arrangements at the residence of the head of the school management committee for students to watch Modiʹs video conference on Pariksha Par Charcha.The students were allegedly warned not to leave midway through the programme, they said.

The complaint, written in Hindi on a school notebook, also included allegations that they are also subjected to ʹcaste discrimination during midday mealsʹ.

ʹStudents belonging to Scheduled Caste category are made to sit separately. Even the headmaster does nothing… he also practices untouchability,ʹ they said, according to the report.

A local organisation, Anusuchit Jati Kalyan Sangh, on Saturday started a protest following a purported video clip of the incident, following which, the head master offered an apology.

ʹThe headmaster, Rajan Bhardwaj, has confirmed the incident and tendered an apology, assuring that this will not be allowed to happen again. But thatʹs not enough,ʹ said a member of the organisation told the paper.

ʹThis matter has come to my notice today. I have asked Secretary, Education to get a report and take stern action,ʹ said State Education Minister Suresh Bhardwaj.

Education Secretary, Arun Sharma told the paper, "The government will seek a report from the local administration and recommend suitable action."

Deputy Commissioner Yunus told the paper that a magisterial probe has been ordered into the incident as it is a ʹserious matterʹ.

ʹSDM Kullu, Sunny Sharma, will hold the magisterial inquiry. The report has been sought in the next two days. Disciplinary action has already been initiated against the headmaster. If the incident is confirmed, criminal liability will be fixed,ʹ the commissioner said.