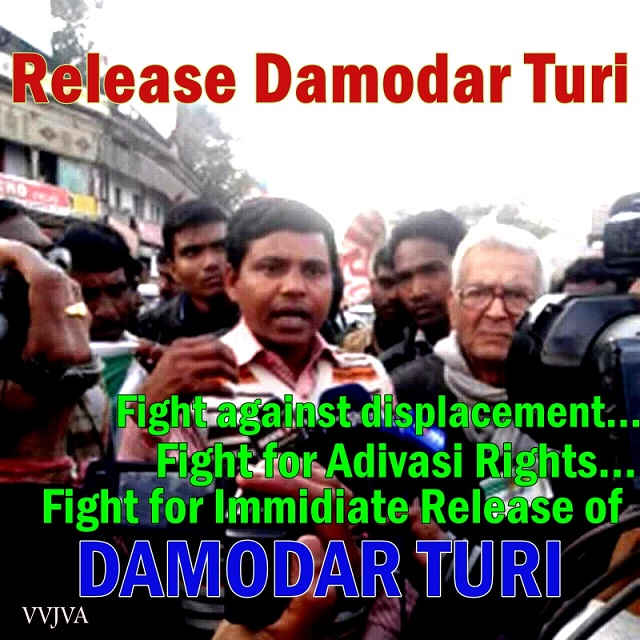 PUDR condemns the arrest of anti-displacement activist and founder member of ʹVisthapan Virodhi Jan Vikas Andolanʹ (VJVA) Damodar Turi, on February 15, 2018 at Ranchi, an hour after the ʹLoktantra Bachao Manchʹ (Save Democracy Forum) organized meeting had ended. He was not shown a warrant for his arrest and was presented before the Giridih Court next day and sent to judicial custody. His arrest was under a case registered at Giridih Mufassil Police Station on November 7, 2017. In this case, twelve persons and 800 unknown persons were booked for participating in a public rally organized by a Trade Union called Mazdoor Sangathan Samiti (MSS), in support of hundred years of Bolshevik revolution and for "attacking" government servants and "preventing them from carrying out their duties". MSS was banned by the Jharkhand Government on 22nd December 2017. According to Turiʹs advocate, soon after the banning of the MSS, the Jharkhand police has implicated Damodar Turi and several others in three other FIRs in Giridih, Bokaro Thermal and Dhanbad. They have been booked under draconian laws like s. 17 of the Criminal Law Amendment Act of 1908 which penalizes membership and participation in activities of an unlawful association and s. 13 of the Unlawful (Activities) Prevention Act, 1967 which penalizes participation in unlawful activities apart from other provisions of the Indian Penal Code.

Damodar Turi is a well known grassroots activist in Jharkhand working against displacement with decades of work behind him, and is not a member of MSS. Accusing him of being a member of a banned organisation appears to be a deliberate attempt to prevent him from working on peopleʹs issues. One of the reasons why PUDR opposes proscription of organisations is because declaring someone a member of an organisation that the Government has chosen to ban, effectively criminalises them and hampers peaceful and pro-people political activity.

VJVA as well as MSS were accused by the Union Home Ministry not too long ago of being associated with CPI(Maoist) in their last Annual Report. The stateʹs alleging such linkages with a banned organisation is a repressive strategy as VVJVA and MSS have been raising issues of Adivasi and Moolvasi peopleʹs rights over forest land and championing the enforcement of Fifth Schedule, PESA and FRA which protect forest land diversion for non-forest use. Activists like Damodar Turi are targeted because they incessantly work to raise issues which concern the public at large. The issue could be displacement or illegal land grab by government or corporate group or killing of civilians by police or para military forces, sexual violence against women or even starvation deaths. Lately the BJP-RSS government in Jharkhand was found assiduously working to erode the rights of Adivasis flowing from Chota Nagpur Tenancy Act, 1908 and Santhal Parganas Tenancy Act, 1949 and to make it easier for the corporate sector and non-Adivasis to acquire rights over land which they covet for its minerals or real estate value. So the arrest of Damodar Turi of VVJVA sends a warning to deter all those working among people and championing their concerns and causes.

PUDR is concerned that by foisting cases on activists who take up peopleʹs issues and accusing them of being hand-in-glove with banned organizations, the Jharkhand government is doing its utmost to curb protests against its nefarious policies which benefit corporate groups. PUDR demands that:

1. Charges against Damodar Turi be withdrawn and he be released immediately 2. Ban on MSS be revoked