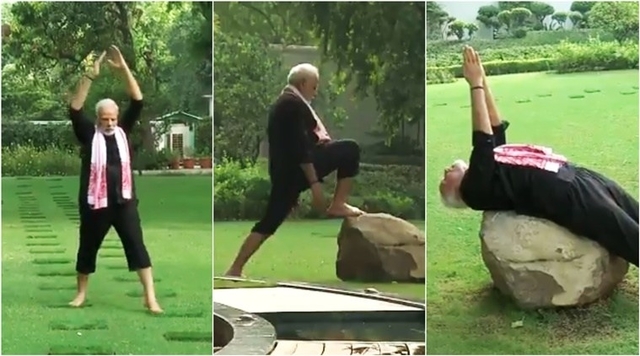 Rs 35 lakh: Yes thatʹs the cost the PMO spent only on Narendra Modiʹs Yoga videos and photo shoot for International Yoga Day June 21, 2018, which went viral all over the world. And yes, these are conservative figures only!

This does not include the costs for the animated yoga videos where a cartoon character resembling Modi is shown demonstrating various asanas or yoga positions. The animated Modi Yoga cartoon video was made by a private party at the insistence of the BJP Media Cell. It is not known if the private party has billed the BJP for the animation, which is expected to cost at least an additional Rs 40-45 lakh. Another source told IndiaScoops.com that such animation could even cost Rs 75 to 80 lakh depending on where it is done. It is much cheaper in cities like Hyderabad, but costs double if done at a large Animation Studio in Mumbai.
Addressing the nation in his monthly radio address, ʹMann Ki Baatʹ, the Prime Minister lauded people who made the animation yoga video and shared the same too.

The PMO is extremely tight-lipped about the expenses for this ʹpublicity stuntʹ and strict instructions have been given to PMO personnel not to discuss it even casually with friends or family. Why all this secrecy, unless the money came from some tainted source?

Officially, the PMO maintains it did not spend a single penny on this shoot – the same was corroborated by a tweet by Sports and I&B Minister Rajyavardhan Rathore on Monday evening, almost 24 hours after the original post went viral, (the post has been updated since then) who stated in his tweet that the videos and photos were shot by the in-house PMO videographer, but unofficially, PMO sources confirmed to IndiaScoops.com that the entire exercise cost over Rs 35 lakh, which was ʹdonatedʹ or ʹsponsoredʹ by a third party. Nobody is however ready to share the name of the third-party and after this news went viral on social media, our PMO source has switched off his mobile phone or probably got himself a new number.

IndiaScoops.com tried to contact the PMO for an official comment or clarification, but were stone-walled. It now seems a huge part of this amount was spent in circulating and disseminating the video and not on the shoot per say, and getting media houses and Tv channels to run it during prime time.

IndiaScoops.com before publishing this post on Saturday, made attempts to contact the Sports Minister Rajyavardhan Rathore for comment, but there was no response, possibly because it was a Saturday and after working hours.

Another RTI query had revealed that the government in 2015 spent Rs 15.87 crore on SMS messages alone to promote Yoga Day ahead of 21 June.

While the PMO source has denied that the amount mentioned above for the yoga shoot was spent from the purse of the Public Exchequer this year, sources indicate that the expense involved in shooting and editing the videos was ʹsponsoredʹ by a private party whose identity is unknown. The videos were shot over 3 days and then edited. Besides the actual video and photo shoot, there was a ʹmaking videoʹ also made. Similarly, there was a professional photo shoot done, which was released publicly only after editing and touch up.

Was this amount paid by the BJP party? The answer may never be known.

Modi posted his fitness video on Twitter which shows him meditating, walking on a track inspired by five elements of nature, and doing yoga exercises.
The AYUSH Ministry spent over Rs 20 crores this year for the fourth edition of the International Yoga Day, reports NDTV. This figure was obtained by RTI and reports were published by several mainline publications.

More than half of this amount was spent on advertisement, campaigns and special programmes across various media platforms like television, newspapers, journals and social media.

The government also spent on accessories like T-shirts, caps, mats for the participants of mass yoga sessions, including the ones organised by Indian missions abroad.

The Rs. 20 crore budget did not include expenditure incurred on security and other overheads. Nor did it include expenditure by various state governments. Several NGOs were roped in to mobilize participants and the expenses spent by these NGOs is obviously not included in these figures. Media reports claim that nearly one lakh yoga enthusiasts were roped in by NGOs for demonstrations in Delhi alone and the logistics alone could have cost not less than Rs 2 crore.
RTI data had revealed that Ayush had spent Rs 32.5 crores last year on International Yoga Day. This yearʹs budget was lower but the government did not want a confrontation with the opposition on the scale of celebrations.

ʹThere are 193 countries in United Nations and except Libya and Yemen, yoga day is being celebrated in all the countries,ʹ External Affairs Minister Sushma Swaraj had said.

The Mass Yoga demonstration at Rajpath in 2015 had cost Rs 7.59 crore. Expenses for the International Conference on Yoga was Rs 1.83 crore The Ministry of External Affairs spent Rs 8 crore for related advertising and promotion activities in various Indian Missions across the world.

Apart from these, the Council for Research in Yoga & Naturopathy (CCRYN) provided assistance of up to 1 lakh rupees per district for the celebration, a total of Rs 6.7 crore. The Morarji Desai National Institute of Yoga (MDNIY) produced a film and booklets on Yoga with an expenditure of Rs 34.8 lakh.

According to information provided by the Ministry of AYUSH under RTI, the vendor for managing the event at Rajpath was M/s. Arch Concept Pvt. Ltd. The vendor was paid a total of Rs 3.67 crore for the arrangements, reports Factly.
While it is not clear where the yoga mats were procured from, with reports claiming that the mats were purchases in bulk from China, the RTI reply suggests that the vendor Arch Concept procured 36000 yoga mats. The total expenditure (including tax) for these 36000 Yoga Mats was Rs 1.02 crore.

Meanwhile, an RTT filed by an Aam Aadmi Party activist has revealed that Rs 8.5 crore was spent just to advertise the Prime Ministerʹs ʹmann ki baatʹ radio address.
A RTI filed by AAP activist Mulk Raj Anand last year revealed that the government has spent over Rs 8.5 crore from January to 29 July – a period of six months, on newspaper advertisements to promote the Prime Ministerʹs radio address, reports the Indian Express.

Congress leader Sanjay Nirupam took a dig at Modi for posting a video on fitness challenge and wondered how many days did he ʹwasteʹ on making the video.

ʹIn last 4 years i.e 1475 days, PM Modi spent 800 days on public rallies, more than 150 days on foreign trips. But he attended Parliament only for 19 days. God knows how many days he wasted on his Yoga videos?ʹ Nirupam, who is the president of Mumbai Pradesh Congress Committee, said.

The prime ministerʹs one-and-a-half minute video came nearly a month after he accepted the fitness challenge thrown by Indian cricket team skipper Virat Kohli.
While posting the video Modi said, ʹApart from Yoga, I walk on a track inspired by the Panchtatvas or 5 elements of nature – Prithvi, Jal, Agni, Vayu, Aakash. This is extremely refreshing and rejuvenating. I also practise breathing exercises.ʹ

Wearing a black jogging outfit, Modi is seen walking on a track created around a tree, doing stretching exercise and sitting on a rock for meditation.
He is also seen balancing himself while walking on a narrow, circular track.

Update: According to a Times of India report, Sports and I&B minister Rajyavardhan Rathore on Monday evening clarified via a post on Twitter that no money was spent on the photo shoot. The TOI report states Rathore ʹslammedʹ Congress leader Shashi Tharoor and said that no money was spent on the PM Modiʹs fitness video. He claimed in his tweet that the video was shot by the PMO videographer.

The Union minister was responding to Tharoorʹs tweet which cited a media report alleging Rs 35 lakh was spent to shoot the video. Quoting the tweet, TOI says, the I&B minister took a dig at Tharoorʹs mention of ʹlambsʹ in the tweet and said, ʹAnd I assure you, sir, not a single ʹlambʹ was sacrificed for the vid, let alone 35!ʹ

IndiaScoops.com responds: We, like most other Indians do not expect the PMO to admit to these expenses, particularly after such a furor on social media. In the post above, we have clearly stated that these were unofficial expenses, incurred by a third party. Which means, they do not fall under RTI. Like we have said above (and in the clarification below), the story is based on inputs provided by a PMO source, the identity of whom we unfortunately cannot reveal at this stage. We stand by our story.