﻿﻿﻿﻿﻿ SUSPEND AGREEMENTS WITH INDIA UNTIL THE HUMAN RIGHT ACTIVISTS ARE RELEASED : MEP TO EUROPEAN COMMISSION
﻿

SUSPEND AGREEMENTS WITH INDIA UNTIL THE HUMAN RIGHT ACTIVISTS ARE RELEASED : MEP TO EUROPEAN COMMISSION 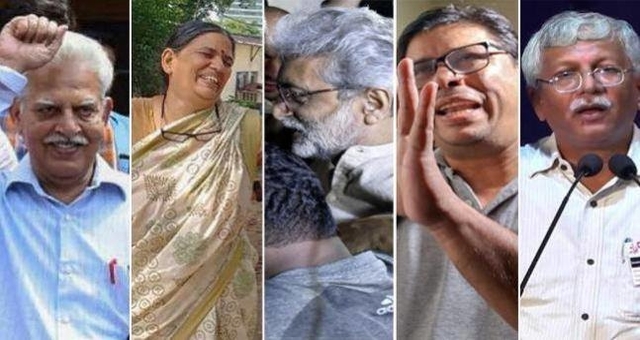 Nine Members of the European Parliament sent today the attached letter to the High Representative of the European Union for Foreign Affairs and Security Policy, Ms. Federica MOGHERINI, regarding the raids on homes and arbitrary arrest of nine human and democratic rights activists across India on August 28 (2018).

With this letter MEPs Lídia Senra, Ángela Vallina, Paloma López, Merja Killonen, Ana Gomes, Clara Aguilera, Ciprian Tănăsescu, Claude Moraes and Julie Ward urge for the cancellation of all the agreements with the Indian government until the human rights activists are released and the hunt against the Adivasi peoples, Dalits, religious minorities population and Kashmir, Manipuri people is stopped.

We, the undersigned Members of the European Parliament, condemn the raids on homes and arbitrary arrest of nine human and democratic rights activists across India, on August 28, 2018.

Amongst the people raided are Anand Teltumbde, Stan Swamy, Kranti Teluka and Prof K Satyanarayana. But the raids also included Arun Ferreira, Sudha Bharadwaj, Varavara Rao, Gautam Navlakha and Vernon Gonsalves, all five are now under arrest charged under one of the most draconian law: the UAPA, Unlawful Activity Prevention Act.

This is one of the most barbaric laws, copied from the colonial law book, which allows an indefinite detention (arrest) of any citizen the Government suspects of having an intent to commit a crime against the State.

These raids and arrests are the follow up of the arbitrary arrests, a few months ago, of Sudhir Dhawale, Adv Surendra Gadling, Prof Shoma Sen, Mahesh Raut and Rona Wilson. These five are lawyers, journalists and human rights activists who have been implicated in totally fabricated charges of organizing the violence in Bhima Koregaon at the beginning of this year.

The Indian Government adds these most recent raids and arrests to the continuous and relentless repression on the democratic voice and aspirations of the Indian. This amounts to a very serious attack on the already crumbling state of democracy in India. Regarding the words of Aakar Patel, Executive Director Amnesty International India: ʹThese arrests are a matter of grave concern. Surendra Gadling, Rona Wilson, Sudhir Dhawale, Shoma Sen and Mahesh Raut have a history of working to protect the rights of some of Indiaʹs most marginalized people.

Their arrests raise disturbing questions about whether they are being targeted for their activism. Anyone arrested for legitimately exercising their right to freedom of expression must be released immediately and unconditionally.ʹ During the current European Parliament term, two written questions have been addressed to the European Commission regarding one of the most painful cases: the situation of the Indian teacher GN Saibaba. He has a 90% physical disability, aggravated in recent months with acute pancreatitis, and it was recommended the removal of his gallbladder.

Because of this, this life imprisonment sentence is actually a death sentence for this professor, who has done nothing but defend the rights of the Adivasis and Dalits people with words, as well as denounce the counterinsurgency strategy ʹOpera on Green Huntʹ. On June 26, United Nations human rights experts urged the government of India to release the teacher for health reasons and to ensure immediate access to medical care, including appropriate treatment and rehabilitation: ʹWe would like to remind India that any denial of reasonable accommodation for people with disabilities in detention is not only discriminatory but may well amount to ill-treatment or even torture. In particular, solitary confinement should be prohibited when the conditions of prisoners with disabilities would be made worse by this measure.ʹ

The answers given by you on behalf of the European Commission were the following:
ʹThe EU has been closely following cases of human rights defenders arrested in India, including the cases of professor Saibaba, accused of having links with Naxal militants, and of Ms. Arundathi Roy, accused of contempt of court for her article defending the cause of Professor Saibaba.
The EU Delegation in New Delhi has made appeals on humanitarian grounds with the National Human Rights Commission. The EU attaches great importance to the issues at stake, most importantly to the freedom of expression, the right to a fair trial and the rights of human rights defenders. These issues are also addressed at the EU-India human rights dialogue.ʹ ʹThe EU continues to follow the case of professor Saibaba convicted by sessions court in Gadchiroli district of Maharashtra in March 2017. As Professor Saibaba lodged an appeal against the verdict with the Nagpur High Court, the case is still sub judice. The EU has been raising the case on humanitarian grounds with the Indian authorities.ʹ How can the European Commission have contacts and agreements with a Government that defends that there are first and second class humans, indiscriminately kills the Adivasis, Dalits and religious minoritiesʹ population and imprisons human rights activists? We urge for the cancellation of all the agreements with the Indian government until the human rights activists are released and the hunt against the Adivasi peoples, Dalits, religious minorities population and Kashmir, Manipuri people is stopped.