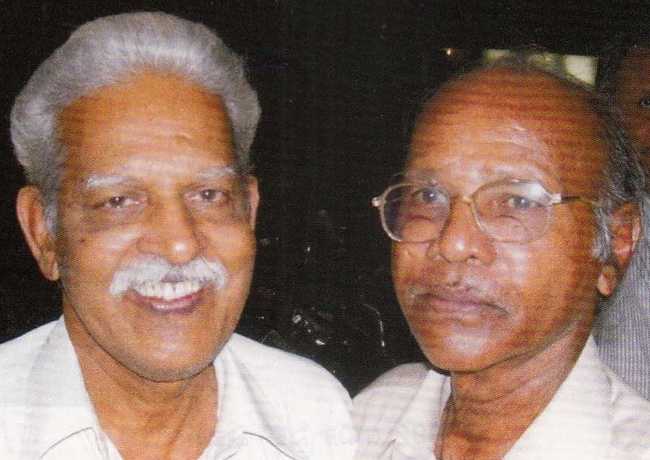 (Varavara Rao, in a letter from prison, dated 29.12.2018, duly censored by the prison authorities, talks about his friend and a famous literary critic Nomula Satyanarayana, who died on 26.12.2018. Varavara Rao came to know about this sad news when his prison mates told him on December28 that they read a news item in a Urdu paper that Chief Minister of Telangana paid tributes to a writer N Satyanarayana. Varavara Rao immediately wrote this letter to me reminiscing about the departed friend. He also wrote a longish obituary in Telugu, but due to want of Telugu-knowing censors, that could not be sent out. This letter reached me today.He had to write this in English to get through the censors!)

ʹ…yesterday evening I have come to know that one N Satyanarayana, a famous writer in Nalgonda passed away and Chief Minister paid high tributes to him.

I think it must be our friend Dr Nomula Satyanarayana. Of my age and also must be a diabetic patient. For long time he is not seen in meetings in Hyderabad. In all probability it must be him.

I went into my pre-university days, when in PUC, we were classmates in Arts & Science College, Warangal, sharing a bunch of papers of some English poems prescribed to us in English poetry, like Daffodils, Lotus Eaters, A village Boy Jack, etc. Of course he must have continued his studies in Hyderabad or completed his MA English privately after joining as a teacher in a government high school, Nalgonda and becoming lecturer doing his Ph D under the supervision of his close friend Prof A Jaganmohana Chary, our JC. Such a simple, short person not affording to buy one English poetry collection book for six poems could rise to buy, read voraciously books in English, Urdu, Hindi and Telugu.

Of course, you know his reentry into our lives through Srjana after 10 years along with D Krishna Murthy through Navin then working in Nalgonda, the earliest people to join Sahithee Mithrulu along with K Ravi Babu. While I was in Jadcherla, I often used to go to Nalgonda between 1967 February and 1968 October on Srjana work as long as Navin was there from the second issue of it, after I have taken the responsibilities of printer, publisher and editor of the quarterly. Since the 5th issue has come as Buchibabu Smriti Sanchika and Navin edited it, I had to spend more time there. Immediately as I reach our sisterʹs house there, these people, particularly Satyam, Krishna Murthy along with Pitchi Reddy, my close friend in campus from MA days, used to come to me and we were out spending more time in Irani hotels sipping tea and discussing literature, particularly Premchand and Ravi Sastry. He was a fan of both of these writers and you know we have published his article on Ravi Sastryʹs Maya of justice in courts based on six sara stories.

I am not sure whether we have his literary criticism – the articles published in Srjana in a collection. it was he voluntarily translated My Family into Telugu and it was a pleasant surprise when he handed over the Telugu translation along with English book by Tao Cheng. Sripati might have asked him to translate giving the book or maybe Ravi Babu. It was in 1972, the first serial Telugu translation of a Chinese novel, prior to Uppena (Hurricane) translated by Nalini and NS Prakasa Rao.

It reads like a Telugu book, and particularly for the common people interested in reading the literature of movements and struggles. It is the book, through which we can remind who Satyam was, than a regular teacher and preacher to his friends, admirers who flocked to him all the time. Naa Kutumbam (My Family) though published without the name of the translator even in later editions, including May 1990, we have decided to bring to commemorate the occasion of his retirement of 60 years, with his name, by which time, maybe by 1990 itself, you were more responsible in bringing them out. With these and more memories about him and my observations I have written an article (obituary) on him in Telugu in foolscap 6 pages, immediately, last night.

It was last when we met him in Kidney Hospital behind our Lakshmi Apartments, Nalgonda Chowrastha, where he was operated for some stones in his kidney. Me and Hema visited one evening while we were there his wife also was there. I think she was also a teacher. Two sons, one Rahul, I know also are English teachers, I think. Convey my deep condolences to them, when you meet them or through Krishna Murthy. I think he will be meeting now and then to give his books or meetings. Did you go for his funerals or any meeting? Jaya Mithra, literary roganisation might have organized a meeting in Hyderabad. Did you write anything on him or spoke in any of the meetings?....