﻿﻿﻿﻿﻿ Release of Hemalataʹs Open Letter to Chief Justice of India
﻿

Release of Hemalataʹs Open Letter to Chief Justice of India 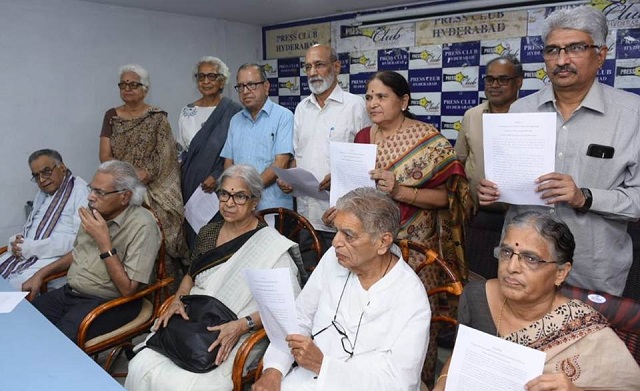 in a well-attended press conference here today, educationist Chukka Ramaiah and senior journalist Potturi Venkateswara Rao, both octogenarians, released the ʹOpen Letter to Chief Justice of Indiaʹ written by P Hemalata, wife of imprisoned revolutionary poet Varavara Rao. The open letter was endorsed by about 100 eminent personalities and democrats in Telangana and Hyderabad and also the same online petition posted on www.change.org was endorsed by more than 660 people from all over the world.

Here is the full text of the press release.

Hyderabad, March 26, 2019: In an Open Letter to Chief Justice of India, released here today at a press conference, P Hemalata, wife of Varavara Rao, the famous revolutionary poet and public intellectual, who is implicated in a criminal conspiracy case and currently imprisoned in Yerawada Central Prison, Pune, requested the CJI to intervene in the case and initiate the process to release Varavara Rao.

Varavara Rao is shown as an accused, along with others, in Bhima Koregaon violence case which was later extended to criminal conspiracy and then to the Unlawful Activities Prevention Act, she said. ʹWhile he has nothing to do with the initial Bhima Koregaon violence (in fact the original perpetrators are not booked at all), I strongly suspect that my husband is implicated in the case just to silence his voice,ʹ she added.

As a college lecturer over three decades Varavara Rao came into contact with thousands of teachers and students and inspired them with his literary and academic personality. Everybody who came into contact during this long association in various capacities always found him friendly, affectionate, concerned, emotional, sensitive and reaching out to help others. His poetry for six decades is a glowing example of these personal traits of him. He is well known as poet, literary critic, social commentator and a renowned public speaker. He holds different and alternative political views and has been an ardent speaker and writer expressing those views. All through his life he stood for some values and social concerns. He has been supporting all peopleʹs struggles including Dalits, Adivasis, women, workers and minorities. He lent his intellectual inputs to Telangana separate statehood movement. He also acted as an emissary of a revolutionary party when the government wanted to have talks with the party to usher in meaningful peace, she said.

She said she was sure that he never ever involved himself in any criminal activity in his 79 years of life. His innocence or non-involvement in criminal activities was also pronounced by various law courts of the land, she added. He was implicated in as many as 25 cases in the last 45 years and police accused him of several grave charges as is being done now. But out of these 25 cases, the courts set him free finding him not guilty in 13 cases after years of prolonged trial and the other 12 cases were withdrawn by the state even before trial. Two conspiracy cases, one went on for 15 years and the other for 17 years, finally ended in his acquittal. This is a clear proof that the prosecution could not prove a single charge in a single case against him. However, he had to spend more than seven years of his precious life in various prisons as an under-trial prisoner.

Now, the Pune police also charged him with very serious and similar offences but we are certain that this case also will not stand the scrutiny of law and he will come out unscathed. In the meanwhile, he is also implicated in another case in Gadchiroli, only to prevent him from coming out on bail in Pune case. But, the issue that is worrying us a lot and the reason why we want to appeal to you is his age and failing health. When he was implicated in and imprisoned for all the false cases earlier, he was much younger and keeping good health. In fact that previous unfounded incarceration took a toll of his health and now at the age of 79 he is being subjected to another imprisonment, she said.

She clarified that she was ʹnot at all questioning the due process of law. but a person without any criminal record, a person on whom police filed about 25 cases vindictively as he was professing unpalatable views to the powers that be, a person on whom a single charge could not be proved in a court of law, a person who is ailing and 79, cannot be subjected to another round of incarceration and harassment, just because a police official fabricated some so-called evidence.ʹ

Hemalataʹs Open Letter is endorsed by about 100 democrats in Hyderabad and Telangana. The letter was also posted on the online petitions site www.change.org and more than 660 people from all over the world endorsed it.