﻿﻿﻿﻿﻿ Around 70 Eminent Personalities Condemn Invocation of UAPA against Students and Activists, Demand Their Release
﻿

Around 70 Eminent Personalities Condemn Invocation of UAPA against Students and Activists, Demand Their Release 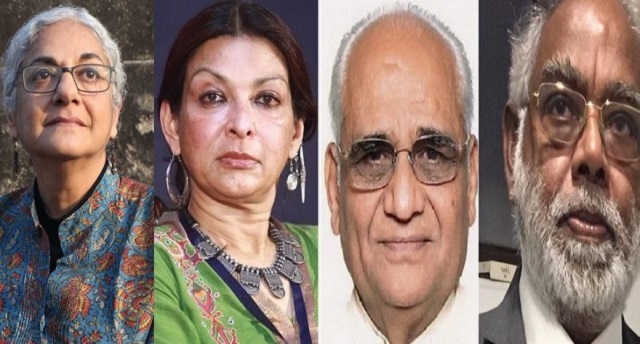 ʹWhen governments all over the world are fighting against the COVID-19 pandemic, Modi government using the opportunity created by the lockdown is fighting dissidents and abolishing them of their fundamental rights and people are being picked up and put in jails under fictitious cases,ʹ said around 70 eminent figures of civil society in a joint statement on Thursday.

In the last two weeks, around half a dozen youth activists and students were booked under the anti-terror law Unlawful Activities Prevention Act (UAPA) and some of them were arrested and sent to jail.

ʹWe, a group of activists and citizens of India, express our deep concern over the recent arrests on the false pretext that have been taking place using the regressive Section 124A of the Indian Penal Code and Unlawful Activities (Prevention) Act (UAPA) by the Union government,ʹ reads the statement signed by noted figures including Githa Hariharan, Justice BG Kolse Patil, Harsh Mander, Mallika Sarabhai, Medha Patkar and John Dayal.

-- On April 14, Anand Teltumbde and Gautam Navlakha were arrested by National Investigative Agency (NIA) in the Bhima-Koregaon case.

-- On April 26, Shifa-Ur-Rehman, the President of Jamia Millia Islamia Alumni Association and a member of Jamia Coordination Committee was booked for alleged involvement in the North-East Delhi riots and was subsequently arrested by the Special Cell of the Delhi Police.

-- On April 27, Delhi Police went to AISAʹs Delhi President Kawalpreet Kaurʹs house and seized her mobile phone in the name of enquiry into the North-East Delhi violence. She was booked under UAPA.

On December 17, Assam-based anti-corruption and Right to Information activist Akhil Gogoi was charged with sedition, intention to cause riot against national integration, and unlawful association under UAPA.

ʹLooking at all the cases together, we firmly believe that the extremely draconian and regressive amended UAPA law has been strategically put in place to exterminate both, dissent and dissidents during the lockdown period due to COVID-19 pandemic,ʹ said the civil society leaders.

ʹUAPA allows the government to proscribe individuals as terrorists and permits more officers of the National Investigation Agency to probe cases. A person charged under the act can be jailed for up to seven years. While passing the law in Rajya Sabha in 2019, Home Minister Amit Shah claimed that "UAPAʹs only purpose was to fight terrorism", but now it is being used as a tool for intimidating citizens and eliminating opposition being faced by the government on various of its policies,ʹ they charged.

In the joint statement, the civil society figures have charged the central government for saving the culprits of Delhi violence by blaming and arresting anti-CAA-NRC protesters.

ʹWith the help of these arrests, the Union government is trying its best to put the blame of North East Delhi riots on Anti-CAA, NRC and NPR protestors and change the narrative altogether as they did in the Bhima Koregaon case. These arrests are being made despite the United Nations High Commissioner for Human Rights urging all states to release ʹevery person detained without sufficient legal basis, including political prisoners, and those detained for critical, dissenting viewsʹ on 3 April 2020.ʹ

They further said: ʹUnion government is saving the real culprits, whereas, young students, activists and coordination committee members who participated in the Anti-CAA protests in different parts of India are being wrongfully arrested. It is an engineered attempt to save indictable people affiliated to the right-wing ruling party like Kapil Mishra, Anurag Thakur, Parvesh Verma, Sambhaji Bhide and Milind Ekbote, who are still at large.ʹ

The civil society leaders have demanded release of the students and activists arrested under UAPA.

ʹWe strongly condemn these unethical attempts being made by the Union government to change the narrative of these engineered acts of violence time and again. We stand together in solidarity with the people that are being suppressed by these regressive laws and demand their immediate release. We also request all citizens to come and stand in solidarity against the draconian Unlawful Activities (Prevention) Act and its targeted misuse by the State, especially during the lockdown due to COVID-19, to silence and threaten activists, students and organisations that are critical of the central government,ʹ reads the statement signed by the following personalities:

Irfan Engineer, Director, Centre for Study of Society and Secularism