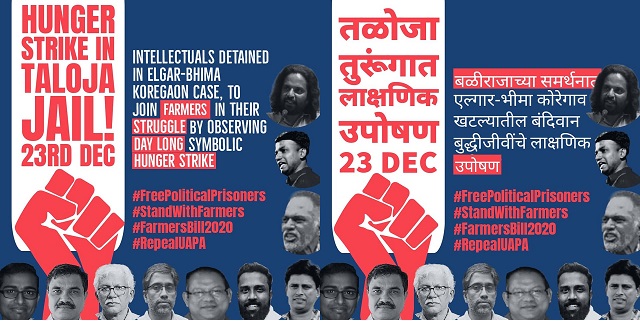 On the farmers day dated 23.12.2020, inmates of Taloja jail shall undertake a day-long hunger strike to express their solidarity with agitating farmers. Activists detained in the Elgar Parishad- Bhima Koregaon case while expressing their support to the demand of the farmers have conveyed the following message through Adv Nihalsing Rathod.

First of all, we pay our tributes to the martyred farmers, who laid their lives during this agitation. We are sure that their martyrdom will make this agitation more firm and resolute than it already is.
We inmates though cannot participate physically in the agitation are participating by observing a day-long symbolic hunger strike. The demands you have raised are absolutely right and just. Central Government has drawn a sinister plot to make farmers slave of the corporate giants, by passing such anti-people laws. The agenda is to grab land from the peasantry, with the aid of the law, and then make farmers serve Adani Ambani as their masters. This is the country where the farmer is revered for his contribution to society. The peopleʹs movement you all have started, foreseeing the plot, is not just historic, it is helping bring the rampant government to its senses. Present-day government, their handlers i.e. Rashtriya Swayamsevak Sangh has been against democracy since their inception. They despise unity, fraternity, equality, for it offends their casteist agenda. Those who remind them of constitutional and democratic ethos, make them feel terrified. The only way they see out is to discredit the preacher of democracy, so as to create confusion in the masses. It is out of this disgusting method, that they call people terrorists, traitors, agents, etc. they have successfully done it in the past 6-7 years, thereby impairing many activists, who dared to show them a mirror. However this time around, the agitating farmers did not let them succeed. We can feel them shivering with fear, fearing that they are losing.
In such an adversarial situation you all have raised such an inspirational movement, that it will prove to be a torchbearer for times to come. You have defeated intentions of Sangh, Modi Government, its Ministers, and their Godi Media; and exposed their plot in front of people. Fourth pillar of democracy and government both have been exposed doing service to capitalists. They have been discarding their accountability towards people. After attacking farmers with water in a chilling cold, a poor attempt was also made to divide them on the basis of religion; instead of having some discussion with them.
Public sector corporations which been build up with sweat and blood of countrymen are being gifted to capitalists. On one side, loans-penalties-taxes are being waived-off for capitalists and on the other side burden of taxes is being forced on common people. When the whole nation was suffering with Covid-19, these same rulers made workers walk thousand kilometers and were at the same time fiding opportunities in problems so they can make profits to their capitalists friends. They have been gifted packages worth lakhs and crores and its pay back is being forced on common people. This nation built up in 70 years with the relentless toiling by farmers and workers, is being brought to sell off by these scounderers. These are only the real anti nationals and terrorists.
In this symbolic day long hunger strike, we had to take decision of not involving Father Stan Swamy and Gautam Navlakha due to their health issues, against their desires. Not thinking of health, they were insisting to join in this protest; but it has been conveyed that respecting everyoneʹs opinion, they are standing morally firm with us.
There is no doubt that unity, spirit of struggle and firmness showed by farmers will be a source of inspiration to people of India. We are fully part of their struggle and we appeal all fellow citizens to join this struggle with all their means and make farmers voice louder.