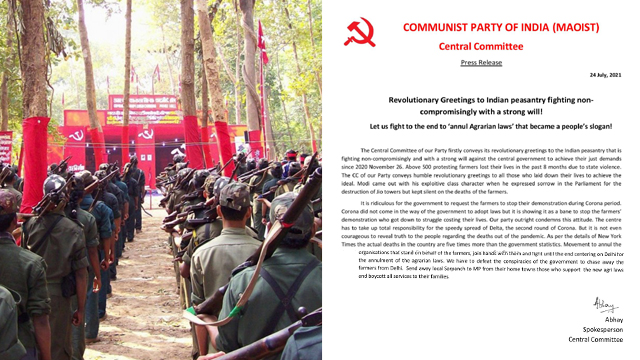 Revolutionary Greetings to Indian peasantry fighting non compromisingly with a strong will!

Let us fight to the end to ʹannul Agrarian lawsʹ that became a peopleʹs slogan!

The Central Committee of our Party firstly conveys its revolutionary greetings to the Indian peasantry that is fighting non-compromisingly and with a strong will against the central government to achieve their just demands since 2020 November 26. Above 500 protesting farmers lost their lives in the past 8 months due to state violence. The CC of our Party conveys humble revolutionary greetings to all those who laid down their lives to achieve the ideal. Modi came out with his exploitive class character when he expressed sorrow in the Parliament for the destruction of Jio towers but kept silent on the deaths of the farmers.

It is ridiculous for the government to request the farmers to stop their demonstration during Corona period. Corona did not come in the way of the government to adopt laws but it is showing it as a bane to stop the farmersʹ demonstration who got down to struggle costing their lives. Our party outright condemns this attitude. The centre has to take up total responsibility for the speedy spread of Delta, the second round of Corona. But it is not even courageous to reveal truth to the people regarding the deaths out of the pandemic. As per the details of New York Times the actual deaths in the country are five times more than the government statistics. Movement to annul the Agrarian laws must continue following precautionary measures for Corona.

The liberal economic policies being implemented in the country for the past three decades are suffocating the Indian agrarian sector and took the lives of lakhs of farmers. As a zenith to these policies the farmersʹ lives are going to end with the Agrarian laws brought forth by the Modi government. Let us fight until the end for the annulment of these laws of the exploitive government so that it does not lead to those destructive conditions. Our party calls upon the people to face these liberalized economic policies in each and every step.

It is one year by 2021 June 5th for the passing of the Agrarian laws. It is one year for the farmersʹ agitation also. The farmers got down to agitation severely opposing the ordinances since they were adopted. Since they took the form of law, initially the farmers held a rally on 10th September 2020 in front of ʹVeepliʹ market in Kurukshetra in Haryana. The police lathi-charged the farmers in tractor rally with the slogans ʹKisan bachao, Mandi bachaoʹ (save farmers, save market). The farmers molded stones as weapons. Since then the farmersʹ agitation has been extending in phases and the anti-farmer attitude of the government took the form of encircling Delhi.

As a result of the peasant struggle going in a manner unique in the world, the Supreme Court imposed stay on the implementation of the new laws on 12th January 2021. It appointed a committee constituted of four members to hold talks with them. But Bhupendra Singh Man, one of the committee members rejected and withdrew immediately. The farmersʹ leaders too opposed the formation of this committee.

As the Supreme Court imposed stay, the central government postponed the implementation for 18 months. The government agreed to - not mention farmers guilty in the measures taken up to prevent pollution in NCR; and to approve the withdrawal of the draft electricity amendment bill (2020). All these are successes of the farmers. However the actual annulment of the laws is yet unsolved. Also the government did not assure law regarding
Minimum Support Price. On the other hand the government withdrew from talks with the farmer leaders after the 10th round on 22nd January thus revealing its anti-farmer, pro-corporate attitude. Our party condemns this attitude. It is appreciable that the ʹSamyukta Kisan Morchaʹ is not adamant and wishes to solve the problem through talks.

The central leaders, farmersʹ fake leader Harpal Singh Belari working as their agents and followers of the government are branding the farmers as Khalistanists and Maoists right from the beginning. The centre had been demonstrating adamant attitude towards the demands of the farmers. It is trying to divert the demands of the peasants starting from hoisting a flag on the red fort and other things. Our party has been severely condemning all these conspiracies from the start.

We once again clearly state that it is our party that continues non-compromising struggles until the end with proper guidance to solve the problems of the entire oppressed people including the peasantry. The central and the state governments are shuddered and state that the Maoists are backing each and every peopleʹs problem. Our party undoubtedly supports all the struggles of the oppressed people of the country. It is our responsibility as revolutionaries to lead them. Whatever name the governments give to it such as urban Naxalites, turban Naxalites and so on, however much laws it amends and adopts, they cannot stop the peopleʹs struggles. No force can stop us to support and lead them.

Our party severely condemns the bloodshed from Shaheenbagh to Silger by the Brahmanic Hindutwa forces who do not have the moral right to utter the names of peopleʹs heroes such as Gendsingh, Baburao Sadmek, Gundadur, Birsamunda, Siddho-Kano, Jyotiba Phule, Bhagat Singh, Ramaraju, Komram Bhim, Baba Saheb Ambedkar, Periyar and other such great persons. Our party once again states clearly on this occasion that unless the farmers take up non-compromising struggles against the pro-imperialist policies of the Brahmanic Hindutwa Fascist forces, none of the problems will be fundamentally solved.

Fighting against the Agrarian laws is not related to peasantry alone. The 80 crore people of the country shall be deprived of the goods available through ration depots. The subsidy rice for the poor with ʹone nation one ration cardʹ that came into implementation shall stop. The Indian government is going to withdraw the subsidy of 3 lakh 17 thousand crore rupees it had been spending on ration depots. These Agrarian laws are going to suffocate the lives of the broad masses in many ways. Our people calls upon all the people of the country to condemn and fight for the annulment of these laws.

It is commendable that the farmersʹ leaders fighting for the annulment of the agrarian laws in the recent elections to Assemblies of states. Elections are scheduled in five states including Uttar Pradesh the coming year. Here too the call must be to defeat the Hindutwa forces. At the same time we should not forget the true color of these Parliamentary political parties. We must remember that all these are committed to the implementation of imperialist neo-liberal economic policies in the country.

The destructive policies of these parties led to the present horrible condition of the Indian Agrarian sector. Therefore our party appeals to unite with the forces and organisations that stand on behalf of the farmers, join hands with them and fight until the end centering on Delhi for the annulment of the agrarian laws. We have to defeat the conspiracies of the government to chase away the farmers from Delhi. Send away local Sarpanch to MP from their home towns those who support the new agri laws and boycott all services to their families.