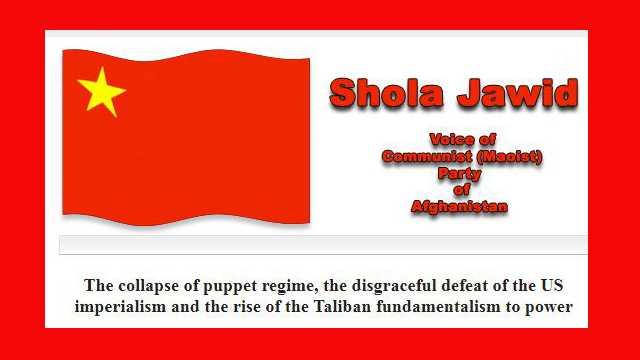 The collapse of puppet regime, the disgraceful defeat of the US imperialism and the rise of the Taliban fundamentalism to power

The deadline for the withdrawal of the imperialist occupying troops was set for August 31, but the puppet regime in Kabul collapsed on August 15. Despite the constant utterance by the American officials that the ʹSaigon momentʹ would not be repeated, the Kabul moment became worse.

On the day Kabul fell to the Taliban, thousands of US military personnel were stationed at the Kabul airport scrambling to evacuate the US embassy. As the Taliban were waiting at the gates of Kabul, the American and other western diplomats were begging them to wait for a ʹpeacefulʹ transfer of power.

Thick dark smoke was rising from the American embassies and other western embassies from the burning of ʹsensitiveʹ documents. The entire episode, from abandoning the embassy to their previous departure from the Bagram base in the middle of the night without announcement, is a stunning display of the military and political defeat of the American imperialist project in Afghanistan.

Now the US imperialists are adamantly trying to downplay their shameful defeat in Afghanistan. They are emphasizing that their project in Afghanistan had a narrow focus to defeat Al Qaeda, which was accomplished by Osamaʹs death in 2011. Biden and his cohorts are downplaying their state-building objectives; gone are the slogans for building modern state institutions that respect ʹhuman rights and womenʹs rights.ʹ For the failure, Biden blames the people of Afghanistan who, according to his imperialist and racist worldview, is incapable of living in harmony.

The American debacle in Afghanistan, more than anything else, shows that imperialists are paper tigers. But this paper tiger is truly in a stage of decline and decay. This debacle shows the decline of its hegemony, the fickle influence of its diplomacy, and the ineffectiveness of its criminally vast and expensive military capability.

The US had realized its failure in Afghanistan by the end of the Bush presidency. The Obama administration was debating cutting their losses and withdrawing from Afghanistan. However, the Obama administration, apparently under pressure from the Pentagon and the military-industrial complex, chose to increase the American troops to defeat the Taliban. The formation of the ʹAfghan National Defence Security Forcesʹ [ANDSF] was the most important and expensive component of the ʹnational reconstructionʹ project undertaken by the occupying forces in Afghanistan.

By January 2015 the US occupying forces had ended its ʹOperation Enduring Freedom,ʹ the name of the American imperialist war in Afghanistan, and handed over the responsibility of the war to the ANDSF. Nonetheless, the occupation of the country continued, although the occupying forces stayed away from the ground battlefield and only provided air support and continued providing training to the ANDSF. Yet the Taliban insurgency continued and inflicted huge casualties to the ANDSF.

The ANDSF were recruited from the poor and the unemployed and used as cannon fodder for a bourgeois comprador state-building project carried under imperialist occupation. Biden touted that the ANDSF was 350,000 compared to the Talibanʹs 75,000 in a press conference announcing the withdrawal of the US troops in April. Biden also touted that the Afghan forces were better armed and equipped. It was thus that the US government assumed that the ANDSF would be able to hold on without US aerial support. But where their assessment missed was that the ANDSF was a mercenary force that lacked the commitment and the political will to fight.

The puppet regime was notoriously corrupt. The last president Ghani, who ran away, called his interior ministry, which controlled most of the ANDSF, as the ʹbeating heart of corruption.ʹ All government officials from the top to the foot soldiers viewed their position as an opportunity to get something. When US aerial support was withdrawn the ANDSF rapidly crumbled, surrendered their positions to the Taliban, and ran away. It was clear that they were unwilling to fight and die for a state that belonged to the bourgeois comprador class who were living like pharaohs.

The state institutions were a burden and a system of oppression for the masses; the masses were receiving little from it in terms of services but suffering a lot from its corruption and brutality. This state was only good for feathering the nests of the rich. There appeared to be a competition among the political elite to see whose mansion and palace were the biggest. Or which one drives around, from home to office, for example, with the largest numbers of bulletproof SUVs, and armed guards?

This ruling class that was serving the US imperialists in the past twenty years was composed of two camps. There was a camp of western-educated technocrats who were the favorites of the western policymakers; they had the lionʹs share of political power. The president running away from the country, Ashraf Ghani, is a good example of the first camp because, before coming to Afghanistan in 2001, he was a professor at John Hopkins University.

Their immediate and primary goal was to expand their wealth. Government institutions were only a mechanism of getting rich. Of course, everyoneʹs share of the loot was always relative to their political power and political weight. For example, Karzai and his VP Fahim and their cronies looted around 1 billion dollars from a Kabul Bank, a private bank; it was a simple transfer of government money into few private hands. In the past twenty years, the top in the pecking order of the ruling classes appropriated a large number of state-owned lands. The capital accumulation through dispossession––such as simply turning ownership of public land into private property––was unprecedented in the history of the country.

The extravaganza of wealth and power of the ruling classes was unprecedented in the history of the country. The masses whom these pharaohs were trying to impress with this ostentatious display of wealth and power were of course overawed, but they also hated them. Such an extravaganza also encouraged and normalized the misuse of power and corruption. Therefore, the system was corrupt from the top to bottom. Even government soldiers were stealing ammunition, oil, and gas and selling them––most often to their enemies, the Taliban.

The US imperialists conducted prolonged negotiations with the Taliban, bypassing the regime. Now it is quite clear that the US diplomatic efforts in Doha were an utter failure; they only enhanced the Talibanʹs prestige, provided them an international platform, and intensified the crisis of legitimacy of the puppet regime in Kabul.

With the Taliban takeover of Kabul, we are witnessing not only the defeat of American military efforts but even more glaring is the US diplomatic failure. The US could not even stop the Taliban from taking over the capital until the last US troops had left, which was supposed to be on August 31.

What they are insisting on is that the future system would be ʹIslamicʹ and ʹinclusive.ʹ Now that the Taliban has won the war with the help of reactionary foreign powers specially Pakistan, they would dictate their form of political system on the country. However, the Taliban are now caught between their ideological commitments to re-establishing the Islamic Emirate and their demands of achieving international recognition.

This tension has the potential of igniting internal friction within their movement. The Taliban are aware that their system of government, which they call Islamic Emirate, a system of government ruled by a council of mullahs headed by a supreme religious leader, is extremely unpopular.

The Taliban spokesperson hinted that they are in consultation, and they could have a different name for their system. By willing to name their system something other than Islamic Emirate, the Taliban is showing political flexibility and the willingness to accommodate imperialists interests and other forces of the ruling classes, possibly sharing political power with them .

However, the Taliban now has a monopoly on violence. The emerging political system, no matter what its title, would be a theocracy dominated by the Taliban. It will be a dictatorship of the feudal bourgeois comprador class implemented with the whip of an austere theocracy. The theocracy will enhance the social oppression of women, religious, and national minorities. National and gender chauvinism under this theocracy would be grimmer.

The revolutionary camp should brace for coming challenges and opportunities. The new emerging regime will be a lethal cocktail of class, gender, and national oppression––a guarantor of semi-feudal and semi-colonial obsolete social relations of oppression and exploitation. The Communist (Maoist) Party of Afghanistan must strive to play its role in strengthening the revolutionary camp and in offering a revolutionary alternative.