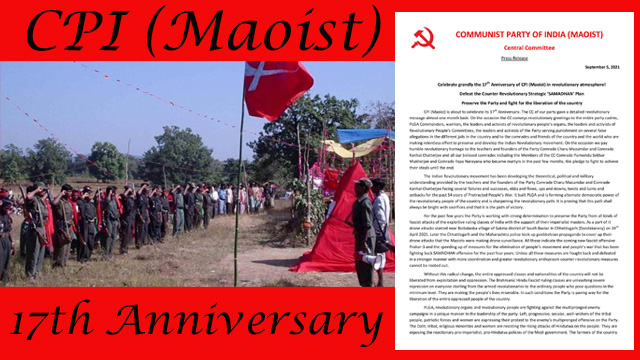 CPI (Maoist) statement on the occasion of its 17th anniversary

Preserve the Party and fight for the liberation of the country

The Indian Revolutionary movement has been developing the theoretical, political and military understanding provided by the teachers and the founders of the Party Comrade Charu Mazumdar and Comrade Kanhai Chatterjee facing several failures and successes, ebbs and flows, ups and downs, twists and turns and setbacks for the past 54 years of Protracted Peopleʹs War. It built PLGA and is forming alternate democratic power of the revolutionary people of the country and is sharpening the revolutionary path. It is proving that this path shall always be bright with sacrifices and that it is the path of victory.

For the past few years the Party is working with strong determination to preserve the Party from all kinds of fascist attacks of the exploitive ruling classes of India with the support of their imperialist masters. As a part of it drone attacks started near Bottalanka village of Sukma district of South Bastar in Chhattisgarh (Dandakarany) on 19th April 2021. Later the Chhattisgarh and the Maharashtra police took up goebbelsian propaganda to cover up their drone attacks that the Maoists were making drone surveillance. All these indicate the coming new fascist offensive Prahar-3 and the speeding up of measures for the elimination of peopleʹs movement and peopleʹs war that has been fighting back SAMADHAN offensive for the past four years. Unless all these measures are fought back and defeated in a stronger manner with more coordination and greater revolutionary enthusiasm counter revolutionary measures cannot be rooted out.

Without this radical change, the entire oppressed classes and nationalities of the country will not be liberated from exploitation and oppression. The Brahmanic Hindu Fascist ruling classes are unleashing severe repression on everyone starting from the armed revolutionaries to the ordinary people who pose questions in the minimum level. They are making the peopleʹs lives miserable. In such conditions the Party is paving way for the liberation of the entire oppressed people of the country.

PLGA, revolutionary organs and revolutionary people are fighting against the multipronged enemy
ue manner in the leadership of the party. Left, progressive, secular, well-wishers of the tribal people, patriotic forces and women are expressing their protest to the enemyʹs multipronged offensive on the Party. The Dalit, tribal, religious minorities and women are resisting the rising attacks of Hindutwa on the people. They are exposing the reactionary pro-imperialist, pro-Hindutva policies of the Modi government. The farmers of the country are fighting non-compromisingly since 26th November 2020.

The tribal people of Silinger of Bastar area are making a tireless struggle against corporatization and carpet security since May 12th of this year. Various classes and sections of people are taking up struggles in solidarity to this struggle all over the state of Chhattisgarh. In the state of Jharkhand, people, especially women are fighting against the police camp in Peertaand block of Giridih district. Shaheenbag, Singhi, Tikri, Gajipur, Kadiyametta and other such have become the model for peopleʹs struggles. The Party is making efforts to intensify struggles such as the anti-displacement struggles going on for the survival and self-respect of the people. These struggles are exposing the fake independence that the ruling classes is highlighting in the name of ʹAazadi ka amruth mahotsavʹ.

This is the time to strengthen the party utmost secret and invincible to the enemy with iron discipline in order to utilize the favorable conditions for revolution developing all over the world. This is the time to strictly follow Maoist work style and method of work. In such conditions the CC gave a call to take up a campaign for consolidation of the party to advance the revolutionary movement. The campaign is achieving good results. As a part of consolidation of the party there were several programs such as preparation of new documents and election of new leadership forces. The party is stepping forward more red and expert combining the war operations, battles, peopleʹs struggles and peopleʹs power.

The Brahmanic Hindutva fascist forces are serving the imperialists as compradors and on the other hand are spreading national frenzy/fake patriotism and are taking forth the agenda to transform India into Brahmanic Hindutwa country. They are implementing New Education Policy accordingly. They are making the lives of the people miserable in the name of self-reliance. They are suppressing the voices of protest and stuffing the activists in prisons. They are also murdering the people and the activists. This new India is in fact only an attempt to end the diversity of the country with Hindu religious frenzy, diehard Hindutva, hegemony of oppressive castes, to end the existence of various nationalities, and the class struggle and to continue the exploitation and rule of the present exploitive ruling classes.

This is against the Dalit, tribal people, the backward castes, religious minorities and women. The entire democratic, progressive, Marxist-Leninist parties, organisations and forces must unite to build a broad United Front and take up various forms of struggle against the Hindutva forces. Pro-people progressive, democratic writers, artists, historians, human scientists and other such intellectuals must become part of these forums. We must state that a new India should not be Brahmanic Hindutva fascist India but New Democratic India.

The people of the country are severely resisting the conspiracies of Corona pandemic that the imperialists and their compradors created and the business of vaccines. All these are the indications of severe crisis of the ruling classes. They are the favorable factors that assure the advancement of our revolutionary movement. Let us utilize them and work for the advancement of Indian Revolutionary movement with new enthusiasm and determination.

On the occasion of the 17th Anniversary of the Party the Central Committee of the party calls upon the entire people of oppresses classes and sections to step forward to be liberated from exploitation and oppression and to establish peopleʹs state power.