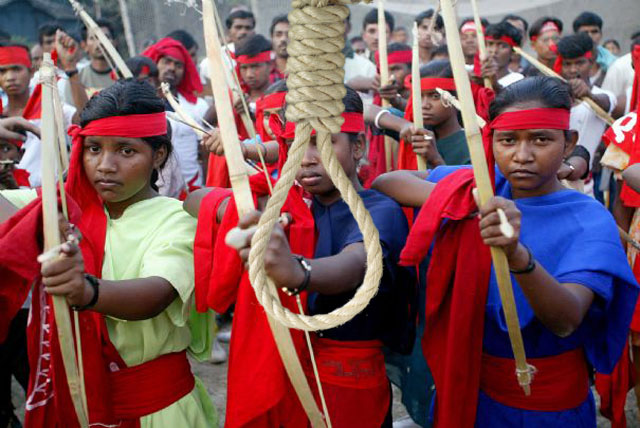 Four death row convicts in Bihar have been waiting for a decision on their mercy petition for more than a decade because their plea to be spared the gallows was lost somewhere in Delhi.

The four Maoist Communist Centre cadre had been sentenced to death by a TADA court in 2001 for the Bara massacre in Bihar’s Gaya district.

Bir Krishna Mochi, Nanhe Lal, Birkuer Paswan and Dharam were convicted for being part of the group that killed 35 people from the Bhumihar community on 13 February 1992.

A three-judge bench of the Supreme Court confirmed the death sentence by a 2-1 majority in 2002, with the dissenting judge, Justice MB Shah – who now heads the special investigative team on black money – unconvinced about their guilt.

A mercy petition filed by them in 2003 initially shuttled between different departments of the Bihar government before it was sent to the Centre on July 7, 2004.
And then, everyone forgot about the mercy petition.

It was only last year that human rights activist Suhas Chakma figured someone had lost the petition.

“We noticed that neither the Home ministry nor Rashtrapati Bhavan seemed to have any record of this mercy petition but the Bihar government insisted it had been sent,” Chakma, who heads the Asian Centre for Human Rights (ACHR), said.

“This is exactly the kind of a case that former president APJ Abdul Kalam would have had in mind when he worried that only the poor and downtrodden ended up in the death row,” he added, contrasting the government’s lackadaisical approach with the super-sonic speed with which Yakub Memon’s mercy petition was cleared in just about a week.

At the National Human Rights Commission that is hearing Chakma’s request for its help to spare the four men from the gallows, the Bihar government last November told the panel that they had sent another copy of the petitions to the home ministry.

Chakma said there were several cases where the Supreme Court had commuted death sentence because of a three year delay in processing the mercy petitions. In this case, the delay exceeds 12 years, he said.