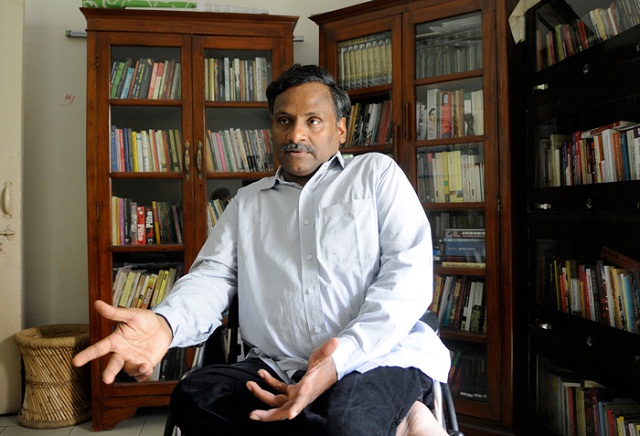 Delhi Universityʹs Ram Lal Anand College has decided not to reinstate
Professor GN Saibaba, who was granted bail by the Supreme Court in April in a case
pertaining to alleged links with Maoists, despite an intervention by Vice­President Hamid Ansari.More than 200 teachers had petitioned Ansari, who is the chancellor of Delhi University(DU), arguing that as per central government rules he should be reinstated to the job since he is not yet convicted. The petitioners also expressed outrage at the treatment meted out tothe wheelchair­bound professor, who is also barred from entering the college premises.

Ansariʹs office last month sent the petition to the college for its consideration. An official fromthe Vice­Presidentʹs office said, ʹWe had received a representation from 207 academics onthis issue.

The office then sent the matter to be further examined to the DU based on the centralgovernment rules of employment and the relevant court rulings.ʹ Prof Saibabaʹs supporters argue that the Central Civil Services(Classification, Control and Appeal) Rules, 1965 allow for ʹdeemed suspensionʹ orders to be revoked in certain circumstances such asrelease from police custody without any prosecution being launched.

The college has, however, decided after having ʹduly consideredʹ the petition that Saibaba should continue under suspension.
Prof Saibaba was arrested in 2014 by the Maharashtra police. An official dealing with the matter said on condition of anonymity, ʹThe case
is seen as a high security issue and no one wants to run afoul of the government on this.ʹ

In an office order dated November 18, accessed by ET, the principal of the college said, ʹThe petition submitted by the academicians and
received by us from the office of the Vice­President, India, has been duly considered. There has been no change in the facts pertaining to
the case.

The matter is still sub judice. Under the circumstances, the suspension order of Dr GN Saibaba, Assistant Professor in the Department of
English, shall continue as stated earlier also in the office order dated 04.07.2016.ʹ
The order was marked to the chairman of the college board and the director of the South Campus, Delhi University.
Vijay Sharma, who was the principal of the college until last month, said there was no change in the circumstances.
ʹAfter Prof Saibaba was arrested in a criminal case, he was put under ʹdeemed suspensionʹ as is the rule. There was a one­man inquiry
commission set up by the college board and its recommendation was adopted by the governing board and so the suspension continues.ʹ
The current principal, Prof Rakesh Gupta, said that following the decision of the governing board, the order to extend the suspension of
Saibaba has ʹprobablyʹ been sent for approval to the DU.
ET could not elicit a response from the DU vice­chancellor despite repeated attempts. Prof GN Saibaba, however, said he had consulted
lawyers and gathered that the ongoing litigation cannot come in the way of his reinstatement as per the law.
ʹThere have been several instances in DU itself of academics facing criminal charges getting reinstated pending trial. The collegeʹs reasoning does not hold water at all; it is only an excuse to not take me back,ʹ he said.
The continued suspension with the 50% salary cut is badly affecting finances and treatment, said Prof Saibaba, who is undergoing daily
treatment for nerve damage in his left hand.

ʹA criminal case can go on for years and under central government rules, one is reinstated except in certain corruption and sexual
harassment cases. I have no money left either to sue the college. I can only keep writing to the V­C of the university and the college,ʹ he
said.