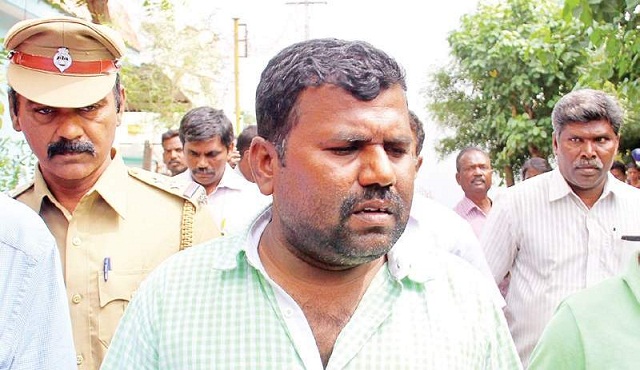 The Tamil Nadu ʹQʹ Branch Police on Sunday arrested a 39-year-old advocate, who used to appear for Maoists, after quizzing him for hours at Alangulam in the city.

Police sources said A Murugan, a native of Periyakulam in Theni district and settled in Alangulam in Madurai, had ʹinstigatedʹ two women arrested for propagating Naxal ideology in Karur in September last. His family members, however, claimed that Chandra (45) and Kala alias Janaki (52) were his clients and the reason for his arrest was to prevent him from appearing in another case in favour of three suspected Naxals who were apprehended in the Murugamalai forests in Theni district.

Murugan has been practising law for over 10 years now and is known for taking up cases of Maoists.
ʹEven as we were sleeping, a team of ʹQʹ Branch personnel barged into our house early in the morning and detained me, our child and my mother-in-law inside the house until noon,ʹ Alagu Devi, his wife, who has just enrolled as a lawyer, said.

Murugan told mediapersons that he was arrested only because he was arguing cases for those suspected as Maoists.

S Raja, Muruganʹs junior, said Murugan is running an NGO named Kudivurimai Pathukappu Naduvam, which has been providing legal aid to the downtrodden. According to him, Murugan, through the NGO, has been providing legal assistance to the three suspected Naxals arrested allegedly for trying to begin an arms training camp in Murugamalai in June 2007. He has been appearing on behalf of five other Naxals, who were held after a gun battle in Varusanadu hills in December 2007.

ʹAs the trial in the Murugamalai case is nearing completion in the Periyakulam sub-court and is expected to come out in favour of the accused, the police have now apprehended him with a motive to put a spoke on his appearance in the case coming up for hearing this week,ʹ Raja alleged.

The police have seized many documents, including the case files and two mobile phones and a laptop. Police said Murugan may be named as a co-accused in the case in which two women were arrested in Karur as he had insitigated them to propagate Naxal ideology.

Velmurugan, younger brother of Murugan, is an accused in the Varusanadu case and is still at large.