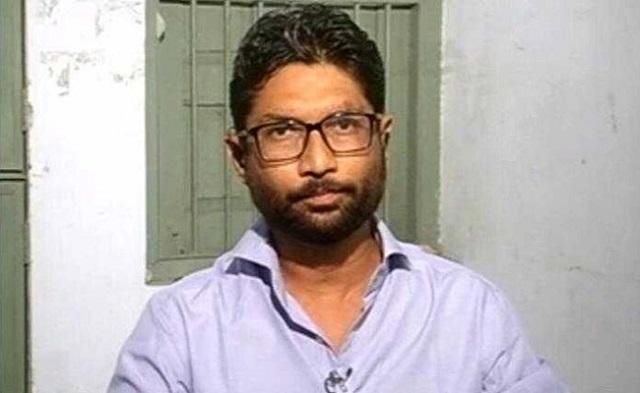 Dalit leader Jignesh Mevani, being aggressively courted by the Congress, says he is clear he will join no political party. But he is also clear that he "will do what needs to be done to bring down the BJP" in Gujarat.

The 36-year-old lawyer and activist, who has led protests in Gujarat against attacks on Dalits after four men were stripped and brutally thrashed with iron rods by cow vigilantes in the stateʹs Una last year, declined an invitation to meet Congress president Rahul Gandhi in Ahmedabad today. Mr Mevani told NDTV that he will not join the Congress unlike another young leader Alpesh Thakor. Mr Thakor, 39, who too has shot into prominence recently leading backward castes in the state, joined the Congress at Rahul Gandhiʹs rally in Gandhinagar today.

"I am not going to join any political party nor am I going to say vote for X or Y party. But this unconstitutional, anti-Dalit, anti-Patidar, anti-farmer, anti-labourer and anti-youth party that this BJP is...I will do what it takes to bring down the BJP, I will campaign for that. This will be my role," Mr Mevani said.

A political alignment, he said, is not necessary. "Alpesh Thakor is against the BJP, same with Hardik Patel, farmers are against the BJP, I am also against the BJP and so are the trade unions. Its not necessary to be aligned to any political party. Those who are fighting for the common manʹs purpose, there is a common understanding that we should somehow not let BJP win," adding, "I donʹt thing votes will get divided."

Prime Minister Narendra Modiʹs slogan of Sabka Saath Sabka Vikas (development for all) has "failed miserably in Gujarat," he assessed, predicting an end of two decades BJP rule in the forthcoming assembly elections, and stressing that it is not people backed by the Congress but "six crore people of Gujarat who have decided to bring down the BJP."

"Many Patidar andolan karyakartas have almost a dozen times raised their voice at PM Modiʹs functions. Dalits, farmers, labourers, Patidars, adivasis, OBCs, Suratʹs businessmen are on the roads protesting, which means something is wrong. So all those who are talking for the six crore people of Gujarat, are all of them Congress backed? he said.

In his public address today, another stinging attack on PM Modi and the BJP, Rahul Gandhi invoked Jignesh Mevani, Hardik Patel and Alpesh Thakor as "young voices that cannot be bought or suppressed," a reference to allegations by a Patel leader who claimed yesterday that the BJP offered him a crore to join the party.

"The youth is often told to shut up. Modi ji has annoyed the youth so much that they simply wonʹt shut up," Mr Gandhi said. He had also invited Hardik Patel, the face of the Patel or Patidar agitation for reservation in government jobs and colleges to meet him today. There were conflicting reports on whether that meeting was held. While Congress sources said Hardik Patel and Rahul Gandhi met at an Ahmedabad hotel, the former said there was no meeting and that he was not even in the city.

Jignesh Mevani, Hardik Patel and Alpesh Thokore have as the three prominent youth leaders in the state, supported each otherʹs movements. But Mr Mevani said Alpesh Thakor abandoning his independent status is not a blow. "No it is absolutely not a blow because its his choice. There was a doubt if he would join the BJP but now he has put an end to the speculation. I am happy that he is not in our enemy camp," said the young leader, who first made national headlines last year when he led hundreds of Dalits in a protest after the Una attack.