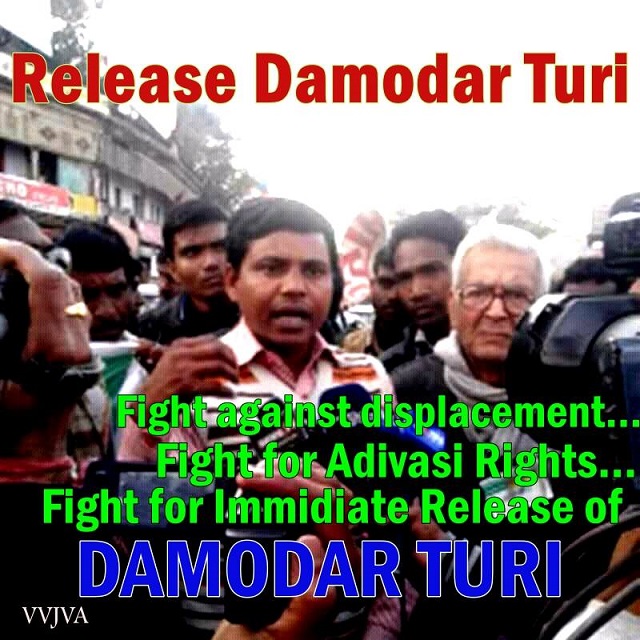 We strongly condemn the unlawful arrest of Damodar Turi (Central Convenor Committee member of Visthapan Virodhi Jan Vikas Andolan) by Jharakhand Police on 15 February 2018. And demand for immediate release for him.

As the new state emerged and from its inception, the sellout of its natural resources to foreign transnational companies and their domestic lackeys began through hundreds of Memorandum of Understanding (MOU) shattering the aspiration of exploited and oppressed masses. He immediately stood against such moves of newly formed state government, and participated and organized struggles for the Jal-Jungle-Jameen of the peasants, adivasis of Jharkhand. In 2006, he took the initiative to form ʹVisthapan virodhi smanway samiti, Jharkhand and All India level organization Visthapan Virodhi Jan Vikas Andolan to resist Memorandum of Understanding to plunder natural resources of mineral-rich areas.

From the last 20 years, Damodar has been participating in various mass struggles in Ranchi, Bokaro, Girdih, Gumla, Santhal Pargana. In particular, his immense contribution to the struggle against the Operation Green Hunt, a multipronged militarily attack on people by then Congress Regime in the name to curb Maoist revolutionaries to grab land and natural resources for corporates. He led the struggle against the death penalty to cultural artist Jiten Marandi in 2011 itself. He took initiative to fight for justice for Moti Lal Baske who was killed by State armed forces in a fake encounter in the name of Maoist. Damodar was one who vehemently opposes amendments in Chota Nagpur Tenancy Act (CNT) and Santhal Pragana Tenancy Act (SPT) to facilitate land grabbing in favor of corporates. This has made him the sore in the eyes of state government who is again unleashing a tranche of anti-people policies.

Damodar has been on the target of Jharkhand police since he questioned the policies of state government from its very inception. Firstly, the state police tried to implicate him under draconian law POTA under which thousands of struggling masses were implicated falsely soon after the formation of new state. At that time, even his family was not spared from torture. Later, in 2008 he was incarcerated in jail for 9 months for a false case under UAPA. He was tortured in custody and it is the indomitable spirit which the government is trying to crush. In that case, he was acquitted recently.

Turi has been arrested in the case related to organizing a public meeting and rally marking the 100 years of Bolshevik Revolution in Girdih, but it is apprehension that he may be implicated in false cases. Arrest of Damodar Turi, All India Convenor of Visthapan Virodhi Jan Vikas Andolan (VVJVA)

We strongly condemn this arrest.

Various groups have strongly opposed this arrest; peopleʹs movements in different parts of Jharkhand are raising their voices against these repressive tactics of Jharkhand State.

In this struggle, we appeal to all democratic forces across the country and around the world to raise voice against the arrest of Damodar Turi and Demand for his immediate release and withdrawal of all fabricated charges imposed on him.

We appeal to the concern people in media to give voice to anti-displacement struggles by writing on the unlawful arrest of Damodar Turi and the anti-people, anti-tribal policies of State.