Other prominent demands of the protesting farmers, according to the statement, include complete change in the river-linking scheme proposed to be started in Nashik, Thane and Palghar districts, so as to ensure that tribal villages are not submerged and water is made available to these districts and to other drought-prone districts in the state; temple lands and pasture lands to be vested in the names of the tillers; increase in pension schemes to poor peasants and agricultural workers; compensation for great losses sustained by peasants due to pest attacks and hailstorms; and burning issues connected to the public distribution system.The farmers have also been demanding implementation of the recommendations of the Swaminathan Commission.AIKS Secretary Raju Desle, while addressing the farmers, claimed that as many as 1,753 farmers have killed themselves since June last when the BJP-led state government announced a conditional farm loan waiver of Rs 34,000 crore.AIKS national president Ashok Dhawle said the BJP government had betrayed the farmers by not honouring the assurances given to them. 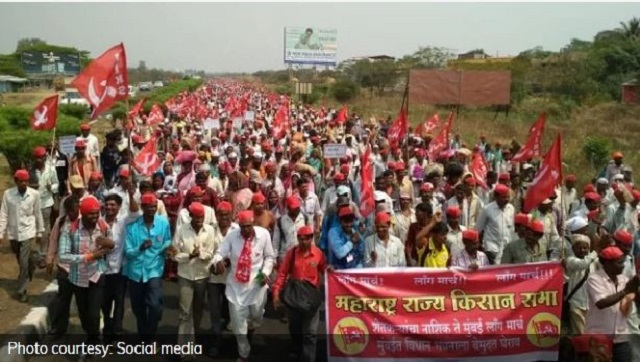