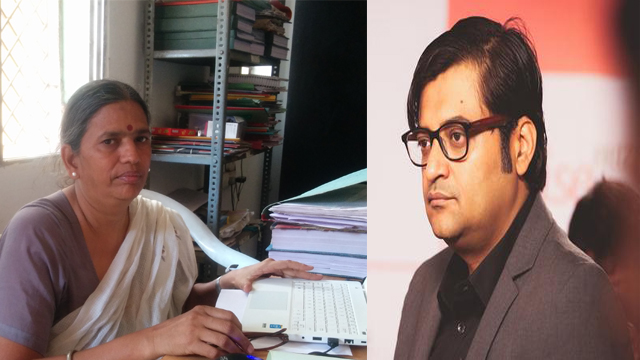 I have been informed that Republic TV aired a programme on 4 July 2018, presented by anchor and MD Arnab Goswami as ʹSuper Exclusive Breaking Newsʹ.

The programme, which is being repeatedly shown, contains a long list of ridiculous, scurrilous, false and completely unsubstantiated allegations against me. Goswami has claimed that I have written a letter (identifying myself as ʹComrade Advocate Sudha Bharadwajʹ) to a Maoist – one ʹComradePrakashʹ – stating that a ʹKashmir like situationʹ has to be created. I am also accused of having received money from Maoists. I am also said to have confirmed that various advocates, some of whom I know as excellent human rights lawyers and others whom I do not know at all, had some sort of Maoist link.

I firmly and categorically deny that the letter referred to by Goswami – if at all such a document exists – has ever been written by me. I firmly refute all the allegations that the Republic TV has made against me, defaming me, causing me professional and personal injury. In its programme, the Republic TV has not revealed the source of such a letter. I find it curious that a document purporting to contain evidence of such serious crimes should first surface in the studio of Arnab Goswami.

I have been a dedicated trade unionist since the past 30 years, working in the organisation of the late legendary Shankar Guha Niyogi, Chhattisgarh Mukti Morcha, in the working class shanties of Dalli Rajhara and Bhilai, and hundreds of workers are witness to the fact.

As a part of my work as a trade unionist I became a lawyer in the year 2000 since when I have fought scores of cases of workers, farmers, adivasis and poor people in the fields of labour, land acquisition, forest rights and environmental rights. Since the year 2007 I am practising in the High Court of Chhattisgarh at Bilaspur and was nominated by the High Court to be a member of the Chhattisgarh State Legal Services Authority.

In the last year I have been teaching at the National Law University Delhi in the capacity of a Visiting Professor, where I offered a seminar course on tribal rights and land acquisition; and a part of the regular course on law and poverty. As a part of the programme of the Delhi Judicial Academy, I addressed the presiding officers of labour courts from Sri Lanka.

My pro-people positions and work as a human rights lawyer are a matter of public record. I am perfectly aware that they stand in direct opposition to the views so loudly and frequently expressed by Arnab Goswami and Republic TV.

In my opinion the present malicious, motivated and fabricated attack on me is because I recently addressed a press conference in Delhi to condemn the arrest on 6 June of Advocate Surendra Gadling. The Indian Association of Peopleʹs Lawyers (IAPL), an organisation of lawyers has also strongly taken up the issue of other lawyers such as Advocate Chandrashekhar of Bhim Army and Advocate Vachinathan arrested after the Sterlite firing.

It is clear that in targeting such lawyers, the state is trying to silence those who stand for the democratic rights of citizens. The state strategy is to create a chilling effect and deny equitable access to the legal system. Also very recently the IAPL had organised a fact finding into the difficulties faced by lawyers in Kashmir.

As a human rights lawyer I have appeared in cases of habeas corpus and fake encounters of adivasis in the High Court of Chhattisgarh and also made representations to the National Human Rights Commission in the defence of many human rights defenders. Recently the NHRC had sought my assistance in investigating a case in Village Kondasawali ( Sukma, Chhattisgarh). In all these cases I have acted with the professional integrity and courage expected of a human rights lawyer. This indeed appears to be ʹmy crimeʹ which has earned me the super exclusive attentions of Arnab Goswami.

I have asked my lawyer to send a legal notice to Arnab Goswami and Republic TV for their false, malicious and defamatory allegations against me.