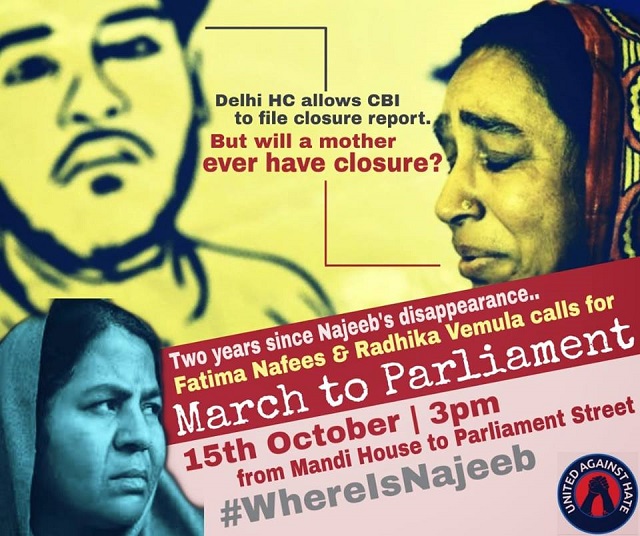 The mother of JNU student Najeeb Ahmed, who went missing from the university nearly two years ago, accused the CBI on Monday of carrying out a "biased" investigation into the case.

The Delhi high court on Monday allowed the CBI to file a closure report in the matter, bringing an end to the investigation into the mysterious disappearance of Ahmed.

It did not agree with the allegation of Ahmedʹs mother, Fatima Nafees, that the CBI wanted to file the closure report due to "political compulsions".

In view of the judgment, Nafees said she will now appeal to the Supreme Court. She also appealed to all mothers "who have faced the pain of losing their children" to participate in a march to Parliament Street on 15 October.

Representational image. Getty imagesProtesters demonstate with banners. Getty images
Nafees was addressing a press conference along with the Jawaharlal Nehru University Studentsʹ Union (JNUSU) office-bearers at the campus after the High Court allowed the Central Bureau of Investigation (CBI) to file a closure report in her sonʹs case.

"I am saddened because the CBI carried out a biased investigation and its sole objective was to shield those who assaulted my son before he went missing. I have been facing injustice right from the first day," she said.

She alleged that a sub-inspector at the Vasant Kunj (North) police station asked her not to name the persons, who had assaulted her son, before he went missing.

"The sub-inspector at the police station told me on the first day, ʹWe will find Najeeb in 24 hours. But if you name people in your complaint, we cannot give any guaranteeʹ. I agreed with what he said but it has been two years and I have no clue about the whereabouts of my son," she said.

Nafees also raised doubts about the Delhi Policeʹs investigation into the case, before the Delhi High Court transferred it to CBI.

The case was transferred from district police to the crime branch in November 2016.

"The crime branch had claimed to have found an auto-rickshaw driver who had taken Najeeb from JNU to Jamia and floated the theory that Najeeb had left on his own. Their theory about the auto-rickshaw driver fell flat after the CBI said the driver had been forced to give a false testimony," she said.

She claimed that her son had not left the campus on his own but there was a "conspiracy behind his disappearance".

She said she will appeal to the Supreme Court and is discussing it with her lawyers.

She gave a call to mothers who have faced "apathy at the hands of the government" to join her in a protest march from Mandi House to Parliament Street.

"People are not safe under the central government. Vivek Tiwari was killed in Lucknow. My son went missing from a university in Delhi but there are many mothers whose children have gone missing from their houses and colonies. Mothers are losing their sons in encounters.

"All the investigating agencies are working under pressure. I am appealing to other mothers who have faced this pain to join me," she said.

"I just want to know my son is safe. I know he will come back one day. I have to put up a brave front in front of my ailing husband and my children. The CBI said they have found people who went missing five years ago. Why could not they find my son?" she said.

JNUSU president N Sai Balaji raised questions on the police and CBI investigation in the case and said there was an attempt to shield Ahmedʹs assaulters, who belong to the ABVP.

"The Delhi High Court accepts CBIʹs plea to close Najeeb Ahmedʹs case. Complete travesty of justice. CBI closed the case without even once interrogating in custody ABVP goons. This is time to extend complete solidarity to Fatima Nafees, who is going to challenge it in the Supreme Court," he posted on Twitter.

The RSS-affiliated Akhil Bharatiya Vidyarthi Parishadʹs JNU unit welcomed the verdict and said the nine students, accused of assaulting Ahmed, have been found to be "innocent".

"The family life and career dreams of these nine students have been shattered due to the petty politics of AISA and its allies. The underprivileged background of these students was a big factor for Left to target them as scapegoats in this case," ABVPʹS JNU unit said in a statement.

The ABVP has always maintained that Ahmedʹs disappearance was an "internal conspiracy" of Left-backed All India Studentsʹ Association to create "Muslim issue" for the Uttar Pradesh elections in early 2017.

As soon as the elections in Uttar Pradesh were over, the whole issue was forgotten by the Left, they alleged. They demanded a fresh probe in Ahmedʹs disappearance.

"We demand that a fresh inquiry be constituted to check the roles of the then JNUSU President Mohit Pandey, AISA leader and Ahmedʹs roommate Mohammad Qasim (who is also the last person to have seen Ahmed) and Bhagat Singh Ambedkar Studentsʹ Organisation (BASO) leader Umar Khalid," they said.

Ahmed had gone missing from the Mahi-Mandvi hostel of the JNU here on 15 October, 2016, following a scuffle with some students allegedly affiliated to the ABVP the previous night.

Nafees had moved the high court on 25 November, 2016, seeking directions to the police to trace her son.

However, as the Delhi Police remained clueless about Ahmedʹs whereabouts even after seven months since he went missing, the probe was handed over to the CBI on 16 May last year.