﻿﻿﻿﻿﻿ Condemn arrest and onslaught on TVV and others activists - SFS
﻿

Condemn arrest and onslaught on TVV and others activists - SFS 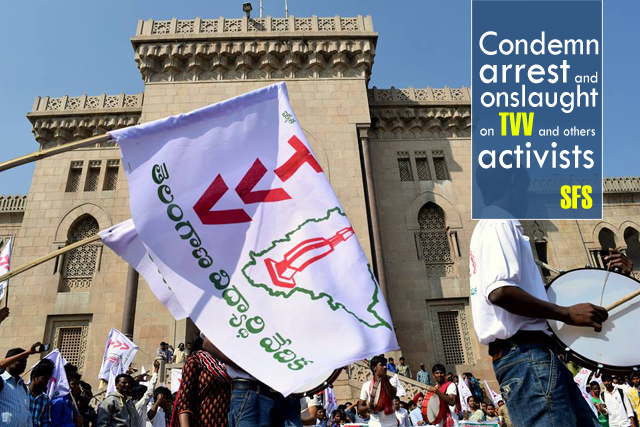 SFS strongly condemns the premeditated arrest of Telangana Vidyarthi Vedika (TVV), Chaitanya Mahila Secretary (CMS), Student March and other progressive and democratic organizationsʹ activists. The Nallakunta police has raided TVV President Maddiletiʹs house for his alleged link with banned maoist party. Gadwal police arrested two TVV members Naganna and Balram for the same above mentioned reasons. Apart from this, an Assistant Professor working at Osmania University in Hyderabad has also been arrested in connection with maoists. All these activists of different organizations have been actively opposing anti-students and anti-people policies of the central and state governments. Instead of responding to the issues raised by these activist organizations, government has as usually resorted to dub these pro-people activists as urban maoist or maoists. It should be noted that government is hell bent on crushing all democratic voices not even sparing liberal voices as they registered FIR against 49 intellectuals in different streams. Therefore, it is incumbent upon all of us to unequivocally condemn and resist this onslaught on hardworking people. SFS appeals you all to unite against this fascist onslaught.