Arrest of B Anuradha & N Ravi Sharma – Fact and Fiction 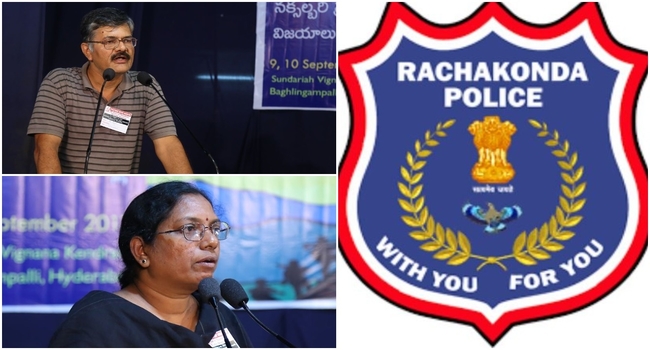 Friends, yesterday around 8 pm a Press Note reached the desks of Hyderabad media, in the name of ʹPublic Relations Officer, Rachakonda Police Commissionerateʹ titled ʹArrest of 2 Maoist Cadres by Spl Team from L B Nagar PS Limitsʹ about the arrest of Narla Ravi Sharma and Bellapu Anuradha. The same appeared on media yesterday and in newspapers today.

The Press Note said, ʹon credible information that two top Maoists who are on bail are actively participating in revolutionary actitivities…the police searched… and found…incriminating Maoist lietarature and three laptops, pen drives and memory cards and correspondence with the Maoists etc.ʹ It also said, ʹbased on the evidence, the police registered a case in Cr No. 1275/2019 under sections 120 B r/w 34 IPC, Sec 10, 13, 18, 18 (B) and 20 of the UAPA and Sec 8(1)(2) of the Telangana State Public Security Act. As ʹBreif facts of caseʹ it listed out various cases against Ravi Sharma since 1988 in Hyderabad, gave details of his ʹUG activitiesʹ between 1998 to his arrest in 2009 in Bihar and Jharkhand, and the meetings attended by him during that period. It mentioned that he was released on bail in April 2016 and surprisingly did not show any specific crime since then except ʹfrequently going underground for long periods and taking part in the meetings of top Maoists in Chattisgarh and other parts of the countryʹ, ʹmet ex CCMs Jantu Mukherjee, BP Singh,..Varanasi Subramanyam,ʹ ʹactively involved in the formation of All India Forum against Hindutwa Fascist Offensiveʹ, and ʹcontinuing his war against the State and actively promoting revolutionary activities in the state and country.ʹ It says ʹa total no. of sixteen cases were registered agains him in which eleven are in Jharkhand, four in Hyderabad and one at Chintapalli, Visakhapatnam Rural, AP.ʹ

Surprisingly the Press Note did not talk anything about Anuradha. Even about Ravi Sharma, though it is true that he was implicated in sixteen cases, right now he is acquitted from fourteen cases. Police could not prove a single charge in fourteen cases against him and courts released him ʹnot guiltyʹ. The Press Note now listed out all those ʹcrimesʹ which law courts struck down. Only one case in Jharkhand and one case in Andhra Pradesh are pending, according to family. Even though the press release mentions the names of some ʹex CCMsʹ whom he met, all of them are on bail right now and very much in public life.

Anuradha and Ravi Sharma were arrested in 2009 in Jharkhand and various cases were foisted against them. Anuradha was in jail for four years and released after getting acquitted in half the cases and was on bail in remaining cases. In the last six years she was acquitted in the remaining cases also. After coming out of jail, she wrote wonderful short stories, based on the lives of inmates, and they were serialized in the Sunday Magazine of Andhra Jyoti daily for several months. The short story collection, ʹEdi Neram? Hazaribagh Jail Gathaluʹ was published in 2015and received wide critical acclaim. The short stories attracted so much attention that most of the stories were translated into Hindi and English and an English translation of the entire collection is going to come out soon from an upcoming prestigious publisher. She has been in public life for the last six years, writing and addressing public meetings, along with going to Jharkhand to attend cases. For the last one year she has been active in All India Forum against Hindutwa Fascist Offensive and became one of its convenors. (Incidentally the Forum was scheduled to hold a press conference to analyse Ayodhya judgment on Tuesday. The press conference was scuttled and the hall was cordoned off by police, other convenors and activitsts were arrested, kept in illegal custody for the whole day!)

Ravi Sharma came out on bail three years ago and since then has been in public life. All his travels during this period were only to various courts in Jharkhand and finally all cases except one were struck down. In the meanwhile he has published a number of edit page political analyses in Andhra Jyothi daily and other newspapers as well as addressing public meetings. He addressed a seminar on Charu Majumdarʹs Birth Centenary a few days ago.

Individually and jointly both of them translated three four books in the last three years.

The police swooped down on the house around 6 am when the couple and ailing 80-year old mother of Ravi Sharma were at the house. Their phones were snatched away and they were kept incommunicado for 15 hours. Ravi Sharmaʹs sister who reached the house around 11 am, his brother and father who reached by 3 pm were also detained and their phones snatched away. The police were inside the house till 9.30 pm. One doesnʹt know what they did in the house for those 15 hours. Several media reporters were waiting in front of the house from around noon and a police officer informed them that there will be a briefing around 6 pm. The promised press briefing was not done but around 8 a press note was directly sent to the media offices by the Commissionerate. The waiting media persons protested for keeping them waited for so long and finally sending the note to offices bypassing them. Strangely, the couple were taken into custody and moved out of the house two hours after the press note on arrest!