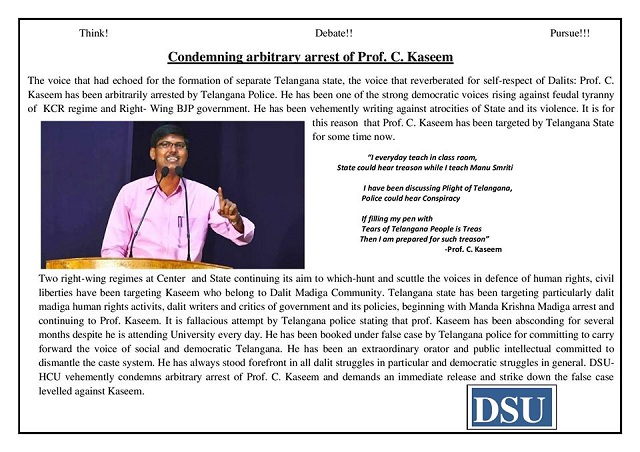 The voice that had echoed for the formation of separate Telangana state, the voice that reverberated for self-respect of Dalits: Prof. C. Kaseem has been arbitrarily arrested by Telangana Police. He has been one of the strong democratic voices rising against feudal tyranny of KCR regime and Right- Wing BJP government. He has been vehemently writing against atrocities of State and its violence. It is for this reason that Prof. C. Kaseem has been targeted by Telangana State for some time now.

I have been discussing Plight of Telangana,
Police could hear Conspiracy

Two right-wing regimes at Center and State continuing its aim to which-hunt and scuttle the voices in defence of human rights, civil liberties have been targeting Kaseem who belong to Dalit Madiga Community. Telangana state has been targeting particularly dalit madiga human rights activits, dalit writers and critics of government and its policies, beginning with Manda Krishna Madiga arrest and continuing to Prof. Kaseem. It is fallacious attempt by Telangana police stating that prof. Kaseem has been absconding for several months despite he is attending University every day. He has been booked under false case by Telangana police for committing to carry forward the voice of social and democratic Telangana. He has been an extraordinary orator and public intellectual committed to dismantle the caste system. He has always stood forefront in all dalit struggles in particular and democratic struggles in general. DSU-HCU vehemently condemns arbitrary arrest of Prof. C. Kaseem and demands an immediate release and strike down the false case levelled against Kaseem.