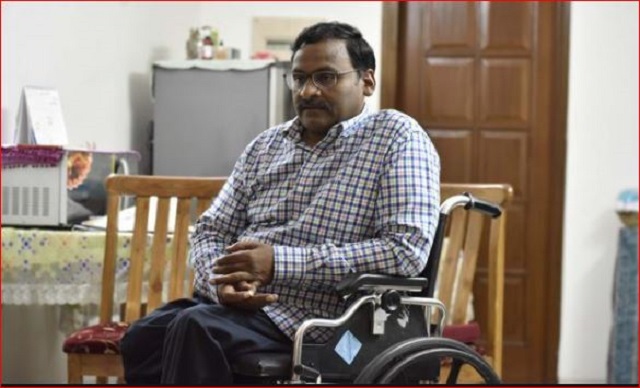 Yesterday i.e 06.11.2020 late evening, Dr. G.N. Saibaba talked to his family members over a phone call from Nagpur Central Jail. Dr. Saibaba informed that he was on hunger strike for about 10 days from 28th October 2020 to 6th November 2020 since his demands previously agreed to were not implemented. This information was actively suppressed from the family, and we were not aware of the fact that Dr. Saibaba began this painstaking ordeal.

The committee, along with his family members had made several efforts by sending emails, messages and making calls to the Jail authorities to know whether Dr. G.N. Saibaba is on hunger striker or not. In our communications to Jail Authorities requested Saibaba not to go on hunger striker due to his precarious health condition. There was no response on this regard from the jail authorities. The jail authorities did not even inform the advocates at Nagpur about his hunger strikes despite of their several attempts to confirm this news by physically going to the prisoner premises. The fact that Dr. G.N. Saibaba went on a hunger strike, was suppressed. Requests for emergency phone calls by family members went unheard and ignored during this period.

The committee and the family could only access this information yesterday via his monthly phone call that, he sat on hunger strike from 28th October 2020. On 6th November 2020, around 1:30 PM, Dr. Saibaba broken-down his hunger strike after 10 days with the assurance to implement his demands from the Jail higher authorities. He is currently being kept on an I-V drip since the hunger strike took a toll on his body.
The following demands were agreed by the Jail authorities to implement immediately
Asking the jail personnel to provide medical records from more than a year, to assess his health condition and for legal action. So far, they did not provide these medical records. Now, they agreed to give a set of medical records.

Previously jail authorities did not allow Telugu books and letters written in Telugu, It was agreed that these will be given to him after scrutiny and hence a delay will occur to reach him.
Agreed to handover the Books and Journals in English immediately and will not be stopped.
Whenever required he will be provided with the medical support and supply of medicine will not be stopped.
As he was languishing between the four walls of the Anda cell, the authorities agreed to take him outside for fresh air in the morning and evening.

The following demands were not agreed:
1. Did not agree to give a receiving copy of his complaint letters submitted to the
prison authorities.
2. Did not agree for the transfer of prison from Nagpur to Hyderabad as it is not in the
purview of Jail authorities.