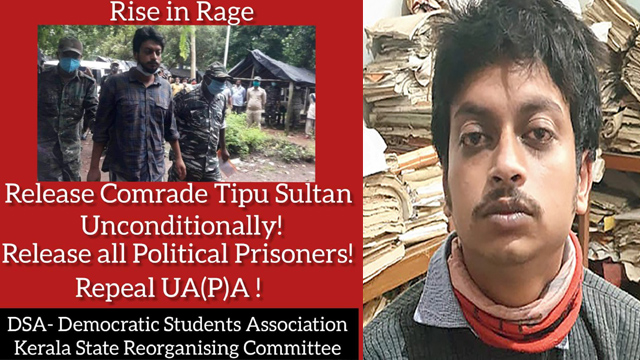 On 12th October 2021, a young activist in his late twenties, Comrade Tipu Sultan was abducted from his house illegally by Bengal State Police officers without producing an arrest warrant or legal notice to his grandfather who was only present at the house. Later the family members were informed that Tipu Sultan was arrested in a 5-year-old, 2016 UA(P)A case in which he is slapped with sections 120B/ 121A/ 121 /122/ 123/ 124A/ 25/27 arms act, 3/4 ES and 18/20/23 clause of UA(P)A act. Tipu Sultan who was a 3rd-year student at Viswa Bharati University in 2016 is purposefully targeted in this fabricated case by the government.

DSA- Democratic Students Association ( Kerala State Reorganising Committee) clenches the fist in support of Comrade Tipu Sultan and demands his immediate release. DSA condemns the arrest of young activists and dissenters under the smoke of pandemic. Mamata Banerjeeʹs crocodile tears for Fr. Stan Swamy should be questioned by the public in wake of Tipu Sultanʹs incarceration under UA(P)A.

Trinamool Congress government of Mamta Banerjee who has an infamous history of slapping UA(P)A on activists should break the silence and speak on the continuous crushing of the political dissent in the state of Bengal. The parliamentary political party of fascist RSS, BJP is united with the reactionary parliamentary political parties like TMC, Congress, DMK, AIDMK, TRS, YSRCP and revisionist parliamentary left parties like CPI(M) in crushing dissent using the draconian law, UA(P)A which resembles the colonial law, Rowlatt act. Registration of UA(P)A case in Bengal and Kerala throws up light that Mamta Banerjee and Pinarayi Vijayan who are projected as Anti-Brahmanism figures in national Politics are competing with Modi.

Hypocrites like Mamta are trying to give society a message that there is Good and Bad UA(P)A and when they slap UA(P)A, it becomes Holy! UA(P)A which pushes one into jail without bail and trial is openly supported by BJP, but the other parliamentary political parties deceive the people by making false promises and political statements against UA(P)A, but these parties practice the same like BJP to protect the ruling ideas of the ruling class of Brahmanic Hindutva India. DSA requests all democratic voices to raise their voice and rise in rage against the arrest of Comrade Tipu Sultan and the usage of UA(P)A.