It is the pages smuggled out from Nagpurʹs high security central prison over a period of three months which will make Delhi University Professor GN Saibabaʹs latest book. He was recently released on bail after spending two years in jail following being charged under Unlawful Activities Prevention Act (UAPA).

While speaking at Lamakaan in Hyderabad, he said the book titled ʹYuddakalamlo Swapnaalu - balya gnapakaluʹ is a Telugu translation of ʹDreams in a time of war- A childhood memoirʹ by Kenyan writer Ngugi wa Thiongʹo and would hit the stands in a couple of months with an introduction from revolutionary writer P Varavara Rao.

ʹThe entire jail was infested with intelligence officers. There would be constant raids in my cell and they would take away anything they found suspicious. I was not allowed to write a sentence in Telugu even as part of a letter to my mother or wife,ʹ said Saibaba who is in Hyderabad.

He was gifted the book by a friend and after finding similarities between the Mau Mau movement mentioned in the book and the ongoing dalit-adivasi movement in India, he decided to translate it. ʹFor three months, each page I wrote would be immediately hidden in any of the 29 Anda cells and reached to the prisoner who had a scheduled court visit. He would carry it in his underwear and hand it over to his lawyer and then my lawyer,ʹ said the professor who is 90 per cent disabled.

He also shared how seven adivasi boys, who had learnt about him in the prison, fought for 20 days to get him basic rights. For first three days, he said, he was not given food, water and toilet facilities in jail. ʹIt took nine months to construct a small western toilet inside my cell and till date it does not work. It took four months to get me a new wheel-chair which my wife brought from Delhi. Till then I was crawling and no support,ʹ he recalled.

Varavara Rao, president of banned organisation Revolutionary Democratic Front(RDF) of which Saibaba is the joint secretary, said that campaign that paved way for the professorʹs release should continue till he is reinstated. Saibaba added that a public movement should campaign for bringing out hundreds of other political prisoners languishing in jails. 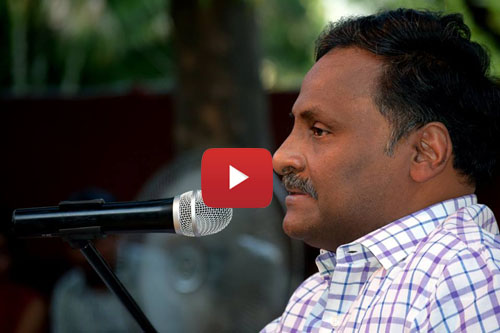