﻿﻿﻿﻿﻿ Support the struggle for human dignity and livelihood .
﻿

Support the struggle for human dignity and livelihood . 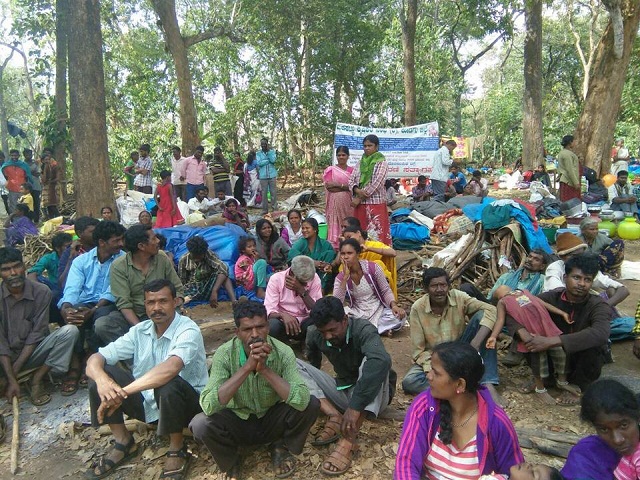 577 Adivasi families thrown to the streets by the arrogant inhuman forest officials in Kodagu, KARNATAKA.

Six months back onwards 577 Adivasi families had legally occupied government land in siddapura near virajpet and constructed hutments in order to escape the bonded wage labour in the coffee estate.
According to central government rules these Adivasi families have to be resettled by alloting them a permanent house as and 2 to 5 acres of arable land. But both the central and state governments have been ignoring their duties till date.
In this situation when the people have taken some steps to escape their drudgery, the local officials instead of helping them have evicted them from that place.
On 11th of this month the forest officials with the help of the police have conducted a midnight operation and pulled down these hutments using bulldozers evicted the people from there and dug up a trench around that place. People who attempted to stop them have been beaten up mercilessly. Few Adivasi men and women driven by their helplessness have tried to hold a naked protest. They They​ have been brutally manhandled and arrested.

These families having been rendered homeless have been living on the streets since then. Having come to know of the situation a team from the Struggle committee of the land and shelter deprived have rushed to the spot on 15 th and studied the situation. After interacting with the suffering people have met the Kodagu DC and appealed to him to undertake necessary steps and resolve the issue. But the DC has feigned helplessness in the matter. The committee has then resolved to stay with the people on the streets and continue the struggle until the issue is settled.